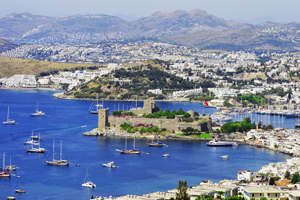 A British holidaymaker has been arrested for trying to fly home with old coins that he found while snorkelling in Turkey.

Security staff at Bodrum airport reportedly confronted Toby Robyns, 52, and deemed that the 13 coins in his luggage were artefacts.

He is being detained in Milas prison on suspicion of “finding Turkish artefacts without notifying authorities” and could be held for four to six weeks until it is decided whether or not to charge him.

The ambulance driver and father of five from Southwick, West Sussex, faces a three-year prison term if found guilty.

It is thought that there are up to 25 shipwrecks around Yassi Ada island, four miles from where Robyns found the coins in Turgutreis.

Residents believe that a recent earthquake may have brought them closer to the shore.

Family friend James Stoneham told The Sun: “This was harmless fun on a holiday. When he went to get his flight home they dragged him off and searched his hand luggage.”

A Foreign and Commonwelath Office spokesman said: “We are assisting a British man following his arrest in Bodrum and remain in contact with his family and the Turkish authorities.”