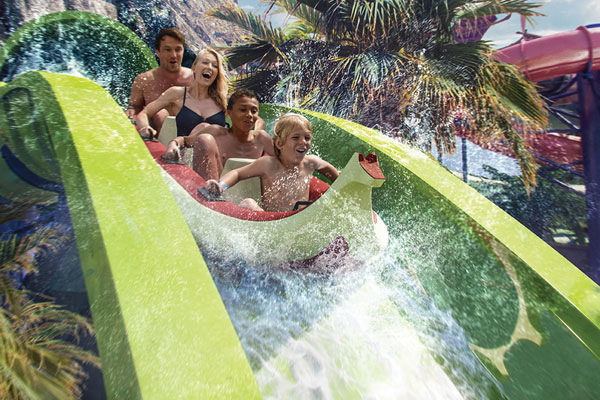 Given Orlando’s penchant for taking a theme and making it larger than life, it’s unsurprising that Universal Boulevard’s latest tenant is a steam-spewing, 60-metre-high volcano. It’s the centrepiece of Volcano Bay, the South Pacific-themed water park that opened in May.

Universal’s third Orlando park – alongside Universal Studios Florida and Islands of Adventure – has filled a hole in the Universal Boulevard bubble, left since the closure of Wet ‘n Wild in 2016.

The park has much to recommend it, but the innovation generating most buzz is the technology. All visitors are given electronic wristbands, or TapuTapu, to access lockers and, when linked with a credit card, as a form of payment. No more digging around in wet swimwear for the waterlogged wallet you forgot to leave in the locker.

But the biggest advantage is the ability to reduce queuing times. Most rides have TapuTapu touchpoints at the entrance. These will display the message ‘ride now’ when there’s no queue. During busier times, the wearer can tap their bracelet against the touchpoint to be allocated a specific ride time.

When I arrive at the Punga Racers and tap my bracelet, a message pops up telling me to return in 10 minutes, which happens to be just enough time for a circuit around TeAwa the Fearless River. In fact, I’m just about to embark on a second lap when a message pops up on my TapuTapu kindly informing me that it is time to ride, and when I head back to the slide, it takes just a couple of minutes to reach the front of the queue.

The park also has multiple ‘tap to play’ points – interactive experiences that can be activated with the wristband. These include spouts of water in the kid-friendly Tot Tiki Reef and light displays inside the volcano, which visitors can walk through. 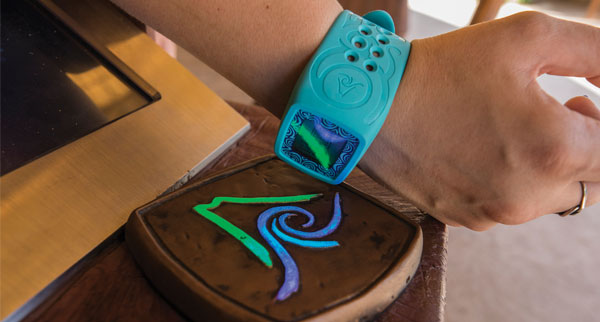 The park covers 28 acres and is divided into four areas: The Volcano, Wave Village, River Village and Rainforest Village.

The heart of the volcano is home to some of the park’s scariest rides, including the world’s tallest trapdoor slide, Ko’okiri Body Plunge, which has a near-vertical, 70-degree drop.

Passing through the centre of the volcano is the Krakatau Aqua Coaster, which uses something called linear induction motor technology – powerful water jets to you and me – to shoot riders uphill as well as down.

The volcano serves another purpose, too. Located smack bang in the centre of the circular water park, it’s an unmissable marker that allows visitors to get their bearings quickly.

There have been rumours of long queues, but it’s worth bearing in mind that new parks are always incredibly busy in the months after opening, especially during peak times.

When I visit, Volcano Bay has reached full capacity by 11am, but the longest I had to wait for a ride was half-an-hour, and that only happened once. The park is also huge, with enough attractions (including two lazy rivers) and plenty of fun-filled space to prevent boredom setting in while visitors are waiting for rides.

The theming is fantastic – from speakers concealed in carved totem poles to the Hawaiian shirts worn by staff members. And the food is the best I’ve come across at any water park. Sure, there are more hot dogs and burgers than you can shake a tiki stick at, but Universal’s chefs spent weeks touring the South Pacific to brush up on their knowledge of local cuisine. Fancy some Hawaiian ahi tuna poke? Make a beeline for The Feasting Frog. Got a craving for coconut-crusted fried chicken? Head for the Kohola Reef Restaurant and Social Club. 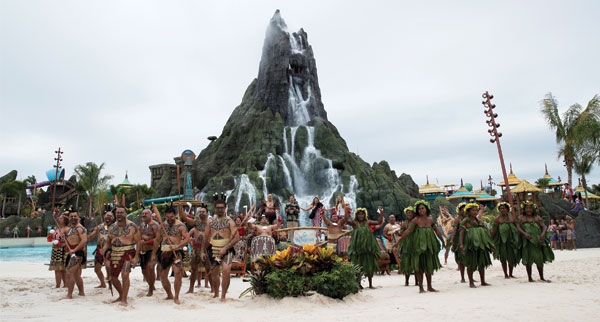 Just as guests at Universal’s hotels get priority access to Universal Studios Florida and Islands of Adventure, they also get to access Volcano Bay an hour before the official opening time.

The closest hotel is Cabana Bay (doubles from £108 per night), which was recently expanded to bring the total number of rooms to 2,200. It’s connected by a dedicated walkway and is a five-minute walk, door-to-door.

Visitors can also use Universal Studios Florida’s car parks, and hop on the complimentary shuttle, which also connects Volcano Bay to all of Universal’s hotels.

My top tip? Don’t forget to pencil in some downtime in this visually breathtaking water park. One of my favourite spots was Waturi Beach, adjacent to the volcano. Pull up a sun lounger and soak in the view, or splash out (excuse the pun) on one of the nearby cabanas. Book one of these tiki-style huts (from $160 a day for up to six people) and you’ll enjoy lounge chairs, fruit baskets, fridges stocked with bottled water and a concierge. All the better to sit back and enjoy the fact that Universal has scored a hat-trick with its third park.

The Orlando Freedom Ticket is one of Do Something Different’s best-sellers, with entry to Universal’s three parks, Walt Disney World’s six parks, and SeaWorld Orlando, Aquatica, and Busch Gardens Tampa Bay, for 14 days. From £759 per adult and £727 per child (aged three to nine).
dosomething different.com 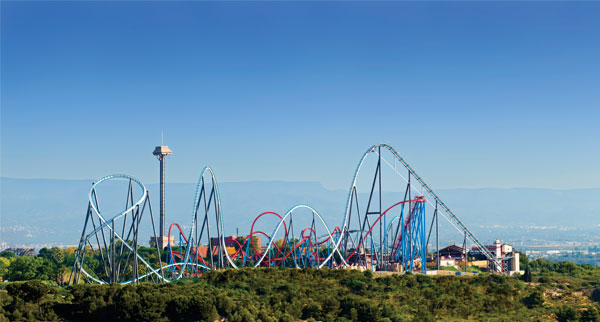 “I wanna go fast!” These words, spoken by fictional Nascar driver Ricky Bobby in cult classic Talladega Nights, were exactly what was going through my head en route to Ferrari Land.

In the speed stakes, its main attraction didn’t disappoint. Red Force – the tallest and fastest rollercoaster in Europe – propels riders from 0 to 112mph in five seconds, and sends you up a 112-metre-high vertical where, for a split second you get your bearings, only to be flung back down.

That’s 15 seconds of pure thrill-seeker’s paradise. One young rider was so thrilled she punched the air with joy after the carriage came to a stop. Will Ferrell’s comedy hero Bobby would have been pleased. 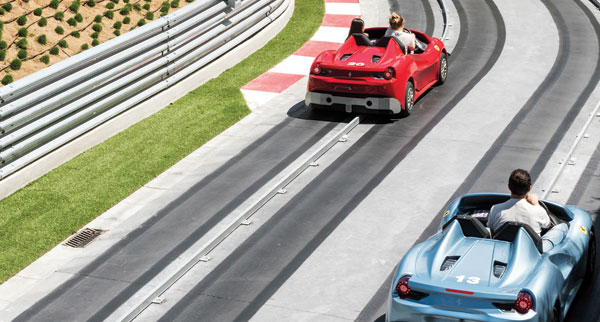 Ferrari Land, which opened in April, is the latest addition to Spanish theme park PortAventura, near Salou on the Costa Dorada. Red Force is the star, but among its 11 attractions, other big draws include two Thrill Towers, which thrust riders up and down using engine-like pistons; 3D simulators Racing Legends, where you can ‘journey through time’ in a Ferrari; and Flying Dreams, which soars over some of the world’s great cities while classic Ferraris twist and turn through the winding streets below.

“One young rider was so thrilled she punched the air with joy after the carriage came to a stop.”

For smaller members of the family – and Ferrari Land is for all ages – the Maranello Grand Race is the chance to drive on what feels like a massive Scalextric set. They can get in the driving seat in the Pole Position Challenge and Junior Championship rides, while wannabe mechanics can try their hand at the Pit Stop Record. Or pop along to the Champions’ Arena for live performances including acrobatics, BMX skills, artistic gymnastics and basketball stunts. Even non-Formula One fans will enjoy the potted history of the car manufacturer in the Ferrari Experience and Gallery. 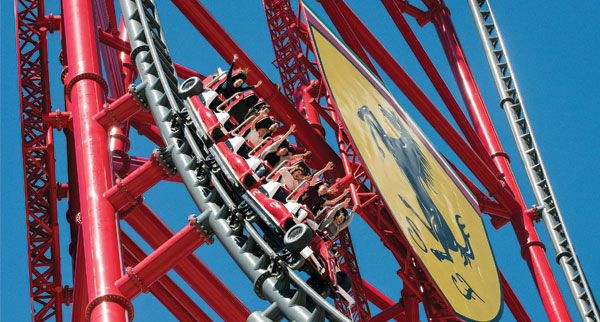 The addition of Ferrari Land is expected to help PortAventura visitor numbers jump from four million in 2016 to five million by the end of this year, and it is now the only place in Europe with three parks, including Caribe Aquatic Park.

It’s a fraction of the size of the main park so would be best sold as an addition to the rides in PortAventura, which is home to high-velocity rollercoasters – Dragon Khan, Shambhala and my favourite, Furius Baco. There’s also a Sesame Street section, and areas modelled around China, the Mediterranean, Mexico, Polynesia and the Wild West.

So for families who don’t have the budget to fly to Orlando, remember that there’s a European alternative – and it just got bigger, and faster.

Book it: A three-day, three-park ticket starts at €80, and two-day two-park tickets for PortAventura and Ferrari Land starts from €60.
portaventuraworld.com

“When we first opened the park, we marketed it on adrenaline and Ferrari’s Formula One links, but we’ve realised that there’s a lot in the park for families. Ferrari is a huge brand, and it’s about style as well as speed. And next year we will be expanding the land with more family attractions.

“We’ve got 2,078 rooms in our on-site hotels, but not everyone will stay here. It’s a great accompaniment to a beach holiday in Salou or a city break in Barcelona.”