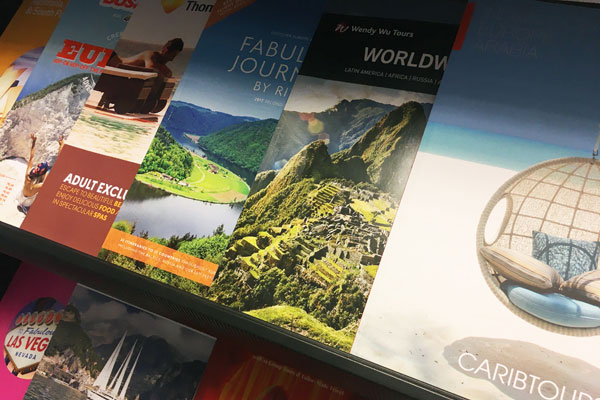 The number of high street retailers receiving brochures has almost halved over the past decade, but more than ever are being sent to homeworkers.

In August, 3,283 Abta-registered agencies received brochures from BP Travel Marketing Services, down from 5,978 in December 2006.

The reduction reflects falling numbers of high street stores, but also a more strategic approach to brochures amid the rise of digital alternatives.

The BP figures reveal 1,673 homeworkers received brochures this month compared with 1,563 in August 2016.

Paul Cusack, managing director of Cockermouth Travel, said: “I’d hate to think of a world without brochures. Customers like to browse a brochure because it’s quicker than scrolling a website.”

Cusack said brochures attract clients into store and give agents an opportunity to sell. He described smaller flyers produced by some operators as a “waste of time”.

Anthony Goord, co-owner of Peter Goord Travel, said agents give out fewer brochures than they used to. He said: “They’re still very important but we spend more time with each client so have a better understanding of what they want.”

Debbie King, director of Departure Lounge Travel in Boston, said customers who book via a high street agent would always want a brochure.

“If they’d wanted to go online for information, they would have done so in the first place,” she said.

A recent audit of agents by Kuoni found “overwhelming support” for brochures.

The luxury operator, which has turned its honeymoon brochure into a magazine, has not reduced its brochure output.

Head of communications Rachel O’Reilly said: “Every agent tells us brochures are really important and they are still a core part of our marketing and sales.

Steve Martin, BP’s sales and marketing director, said: “Operators and agents are really switched on now. Gone are the days when operators sent a blanket 20 brochures to a store.

“They send them to agents who want them. Equally, agents don’t order everything now. They don’t want a pile of brochures they won’t use.”

Thomas Cook received brochures from BP at all of its 709 UK stores this month. It has closed dozens of shops in the past year but says brochures are a key part of holiday inspiration.

In contrast, Thomson plans to  phase out brochures by 2020.

The Tui retailer says this is due to customer experience, not cost, and attributed its fall in receipts of brochures to the strategy.