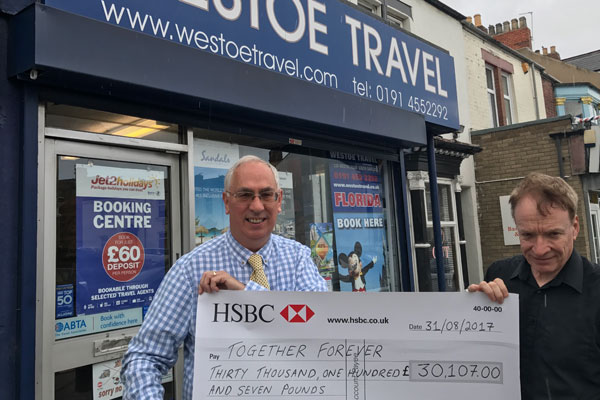 The appeal for the families of Westoe Travel Apprentice Chloe Rutherford and her boyfriend Liam Curry has passed £30,000.

Travel agent apprentice Chloe, 17, and Liam, 19, were killed in the terror attack in Manchester that left 22 people dead.

An event was held at the Customs House in South Shields on when television personality Chris Ramsey accepted a cheque for £30,107 from Graeme Brett of Westoe Travel and Ken Garrity of Ken Garrity Travel on behalf of the families.

More than 60 travel industry suppliers and agents who had donated prizes and sold tickets were at the event.

The total included the big prize draw raffle, individual donations, pledges from Travel Weekly’s Agent Achievement Awards, donations via Just Giving and those made at other events.

Ken Garrity brought a cheque for £2,000 from the Rotary Club of Altrincham to add to the fund, helping it to pass £30,000 mark.

Graeme Brett, owner of Westoe Travel, said: “It was a very emotional night with Chloe and Liam’s parents attending as they wanted to personally thank everyone who had supported the appeal.

“They are such wonderful people and everyone who met them was honoured to have been there.

“We are so grateful for everyone who has supported the fundraising and hope that it can provide some assistance to the families as they try to move forward.

“The families said that they were so overcome by how supportive the travel industry had been to them.

“We know there are still some more donations on the way to us and we will be keeping the appeal open to accept further donations.

“Thank you so much to everyone who has supported the fundraising. The travel industry has again shown why it is so unique in supporting each other.”

Anyone wishing to donate to the appeal can make cheques payable to: Together Forever c/o Westoe Travel, 120 Westoe Road, South Shields, Tyne and Wear, NE33 3PF.

Alternatively, donations can be made via bank transfer to: HSBC, using sort code 40-34-18, account number 14403002 and account name ‘Together Forever’.