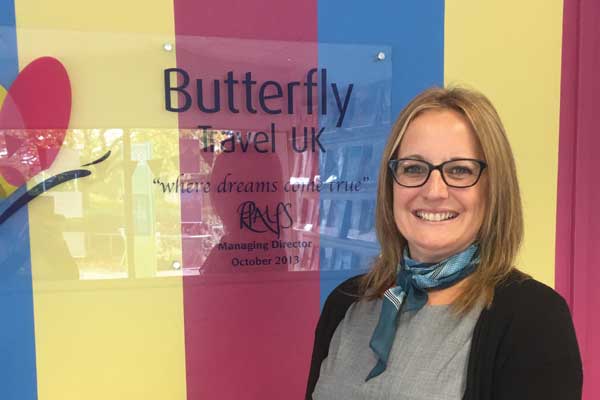 Butterfly Travel is getting ready to mark four years since its opened its doors. The agency is also celebrating its best sales year ever, having reported 35% year-on year growth. Amie Keeley spoke to owner, Felicity Ralfs.

Q. What are you doing to celebrate your fourth anniversary?
A. We’ve rented out the Nailsea Tithe Barn in North Somerset and invited 15 tour operators and 100-150 customers to help us celebrate our birthday on October 30. There will be champagne and canapes and we will hold a charity raffle, as well as give out goodie bags at the end. The barn will be decked out in balloons in the colours of our shop logo, and we will have a cake too, made by a friend who has a cake business. We don’t do it for bookings, but it does generate some afterwards, which is a bonus.

Q. You’ve seen business grow 35% year on year. What do you put that down to?
A. I think people are booking more long-haul because they get more for their money. Ever since terror attacks in places such as Tunisia and Turkey, prices in Spain have increased so people are looking to travel further afield as it’s better value. Also, our service. I employ three members of staff who collectively have more than 70 years experience. We manage the holiday from beginning to end so the customer can sit back and relax knowing we will deal with everything for them. I am available 24/7 to deal with any issues. It’s about going the extra mile. We send customers birthday cards or flowers for anniversaries and serve prosecco in the shop sometimes.

Q. Why did you decide to open your own shop?
A. I was a branch manager for Going Places, which later became Thomas Cook, and I was put into consultation when they restructured. I didn’t want to reapply for a job as a cluster manager and always dreamt of having my own shop, so it was time to make it a reality. I put together a business plan and my dad lent me some money, which I was able to pay back within six months of opening.

Q. What are the pros and cons of owning your own business?
A. Independence. You can use so many more suppliers and you are your own boss so there’s nobody to answer to. The only disadvantage is the long hours.

Q. How do you attract customers?
A. I am local and have worked in the town for 10 years so I have a loyal customer base. I advertise in the local paper and use social media. I’ve also hosted a few presentations with suppliers and customers. I organised one with Wendy Wu Tours that led to six bookings.

Q. What do the next four years have in store?
A. I’d like to open another shop, but I’m not quite ready to let go of this one just yet to focus on another. The success of my business is mainly down to word of mouth, so I don’t want to run the risk of losing that if the service drops.