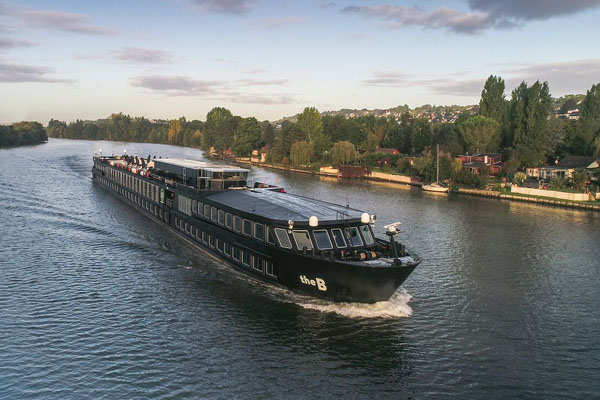 Gallery: U by Uniworld’s The B

Pictures of U by Uniworld’s first ship have been revealed for the first time after it began its maiden voyage along the Seine River.

Newly renovated sister ships – The A and The B – aim to offer immersive, fun and adventurous travel for its customers aged between 21 and 45 years old.

The B ship set sail on Saturday with supermodel Petra Nemcova who led the renaming ceremony on board, where guests released lanterns to symbolise the changeover from Uniworld’s River Baroness ship to The B.

The 120-capacity The B was renamed following extensive renovations and design changes of Uniworld’s River Baroness ship.

Both vessels have a black exterior and feature a sleek interior design with open communal spaces and rooftop lounges.

The B features four suites, 26 balcony bedrooms, 29 studio bedrooms and two studio bedrooms with triple occupancy – all with waterfront views and equipped with built-in Bluetooth speakers.

After the renaming ceremony, pop-electro band Shine performed live as guests on board danced away.

The A and The B’s itineraries begin in April 2018 with prices starting at £159 per person per day.

Both ships will sail along the Rhine, Main, Danube and Seine Rivers with overnight stops and longer stays available in major cities – including Paris, Vienna, Amsterdam and Budapest.

Gallery: U by Uniworld’s The B