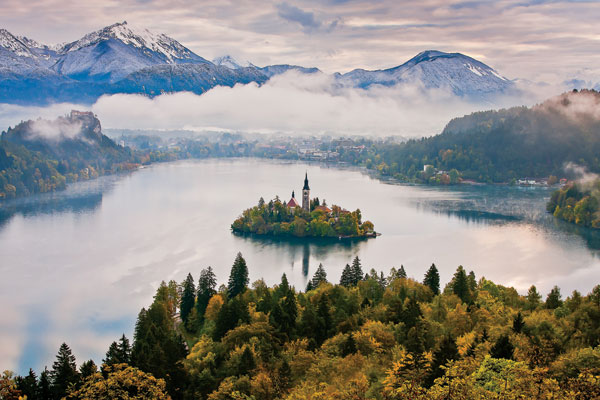 Getting active is a great way to soak up Slovenia’s fairytale landscapes, finds Laura French

Slovenia is the place that time forgot. Mountainous, green, lake-filled and friendly – travelling here is like coming up for air, filling my lungs with fresh, pure oxygen that I missed with a passion when I returned to hectic London.

Nowhere here is overrun, and nothing feels stressful. Perhaps it’s the Italian influence, or the sheer presence of untamed nature. Pines shroud the landscapes – 60% of the country is forest – and lakes in impossibly bright shades of blue speckle stretches of vast, people-less land; population-wise, it’s a quarter the size of London.

Alpine villages, rushing rapids and rugged, snow-capped peaks are everywhere you look, inviting exploration from intrepid adventurers, while fairytale castles and architectural feats give it a boost for those seeking culture.

Word is catching on: visitor numbers to the country were up 9% in 2016 compared to the previous year, with UK visitors taking a 3.5% share of the market. However, it still feels happily peaceful and pleasingly cut off – which makes it a quieter alternative to nearby Croatia, Italy and Austria, and a worthy recommendation come winter or summer. 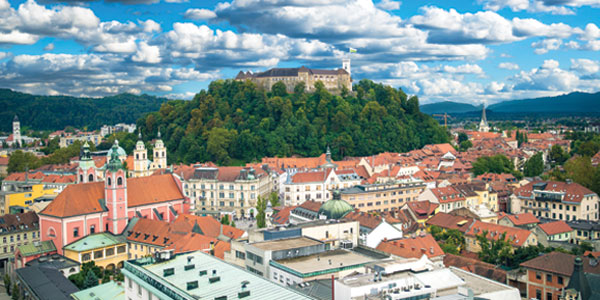 Central to the city’s modern face is architectural master Jože Plečnik, who set about reviving its buildings and embankments in the early 20th century with a minimalist style. Visitors today can check out his house to learn more about his slightly unusual tendencies – which included designing a deliberately short bed to force himself up in the morning to work – or take a tour to discover the influence he had (€20 per person with Ljubljana Tourism).

We gained a unique perspective on his work by paddle-boarding our way along the river with a local guide, glimpsing the city’s honey-coloured buildings and stone bridges as tourists snapped photos of us like we were One Direction reunited. Bar some slightly treacherous moments manoeuvring through the ripples, it was overwhelmingly peaceful, and costs €35 with Bananaway.

For those more into eating and willing to loosen the belt a notch, recommend the Taste Ljubljana Culinary Tour, which costs €38 per person, also with Ljubljana Tourism. Local guide Urban took us across the city to chow on the likes of klobasa sausage, beef tongue carpaccio and walnut potica cake, while sinking glasses of local red and blueberry liqueur, all before 11am. If this is how Slovenians live, I think it might be time to relocate.

Outside the city there’s plenty to see and do, and among the country’s most popular attractions is Postojna Cave, one of more than 11,000 caves in Slovenia. Here, humongous limestone icicles sparkle copper, sapphire, emerald and cream, and rocks resembling giant pinkish brains sit beside baby stalactites jabbing out like tiny fingers.

The limestone formation spans 15 miles and tours take clients along more than three miles of it, with a train meandering through vast, ornate chambers. We opted for the Coloured Passage and Lower Tartar Adventure Tour, a two-hour extension to the normal trip that saw us abseil deeper into the cave before sailing over a black, murky river at the bottom, golden lights adding a certain mystery that felt distinctly Pirates of the Caribbean (from €100 for a private guided tour, for groups of three to 10 people).

For clients staying in the city, suggest a day trip here, bookable via attraction providers such as Viator. Most throw in a stop at Predjama Castle, a Renaissance fortress built into a cave that was home to characters such as rebel knight Erasmus, ‘the Robin Hood of Slovenia’, who stole from the rich and was killed by a cannonball while on the toilet.

Nearby Bled isn’t short on legends either, but the best thing about this Alpine jewel is the number of activities – from hiking and biking to climbing, paragliding and kayaking.

At its centre is the lake itself, a sprawling expanse of iridescent jade turning violet at sunset, where sunbathing and swimming are equally seductive options. Overlooking it all sits the medieval Bled Castle, home to a museum and high-end restaurant where mounds of steak tartare and beef cheeks are served against a backdrop of sparkling lights.

The lake is easily doable as a day trip from Ljubljana, a half-hour drive away, but this place warrants some extra time. It’s best explored on foot or bike – cycle routes surround the area, taking you to the likes of Vintgar Gorge, where rapids crash down in foaming, aquamarine bursts, carving their way through verdant, humid forest. 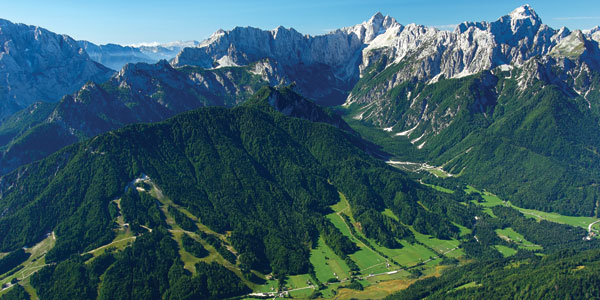 If it’s the sort of thing that appeals and clients have a little more time, recommend Kranjska Gora, a ski resort and hiking hub peeping out from the Julian Alps in the northwest corner, relatively unknown among the UK market despite being featured by the likes of Inghams, Thomson Lakes and Mountains and Crystal Ski.

Luckily, I could indulge without the guilt thanks to an active day, which began with a pleasant two-hour hike through the forest to the sky-high Pericnik Waterfall, set against a craggy, green grey cliff face, and ended with a zipline at Planica, renowned for its ski-jumping – picture whizzing over the Alps at lightning speed, carpets of pine forest in the distance and patchwork-coloured peaks all around (€25 with Planica Zipline).

It was Soca Valley, etched into the mountains around 30 miles south of there, that had me most enchanted, with its handful of ski resorts, including the small town of Bovec.

It’s best known for rafting – we embarked on a two-hour excursion that had us bounding down swirling rapids and meandering around boulders before voluntarily jumping off a rock into ice-cold water. The rapids are generally quite gentle so it’s suitable for beginners, but children need to be over 10. Various companies offer the six-mile rafting trip between April and October, and it lasts two to three hours.

Best of all though were the surroundings – Mount Triglav soaring 3,000 metres high over our heads, luminescent blue water beneath our boat and bottle-green trees surrounding us at every turn. Although, quite frankly, after a few days in these impressive landscapes I’d come to expect nothing less.

Exodus has an eight-day Slovenia Mixed Activity trip featuring white-water rafting, kayaking, mountain biking and ziplining in the Soca Valley, from £1,099 per person for departures in summer 2018.
exodus.co.uk

Cox & Kings offers a six night Taste of Slovenia self-drive, visiting Ljubljana and Lake Bled as well as the wine region and coast,
from £1,695.
coxandkings.co.uk

Balkan Holidays offers a week in Kranjska Gora, staying half-board in a double room at the four star Ramada Hotel & Suites, from £484 per person, based on a June 10, 2018, departure, with flights from Gatwick and coach transfers.
balkanholidays.co.uk/agents

Ramada Resort Kranjska Gora
This family-friendly four-star (below) in the Julian Alps has decent rooms, serene surroundings and a large indoor pool, plus an excellent spa.
ramada.co.uk