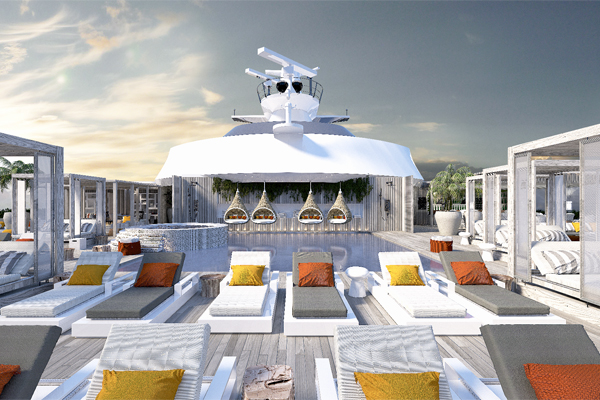 Celebrity Cruises’ president and chief executive has told UK agents to “sell the hell out of Celebrity Edge” to ensure one of the next Edge-class ships is based in Southampton.

Speaking as she announced European deployment for Celebrity Edge in summer 2019, including a two-night cruise from Southampton for UK agents, Lisa Lutoff-Perlo said: “It’s in agents’ hands. We have five Edge-class ships coming between 2018 and 2023 and depending on how the UK trade reacts to the first ship, then there’s always a chance I could deploy a future ship to Southampton.

“It’s in your hands. Sell the hell out of Celebrity Edge and you will leave me no choice but to bring a future one to Southampton.”

Jo Rzymowska, vice-president and managing director, UK & Ireland and Asia, said: “The fact that our president and chief executive is coming to London to make the announcement about Edge’s European deployment speaks volumes for how she views the UK cruise market. It’s hugely important to Celebrity Cruises.”

She added that Celebrity hadn’t staged an inaugural sailing for trade partners in Southampton since the launch of Celebrity Eclipse in 2010.

“Seeing truly is believing so this will give us the chance to show agent partners exactly why Celebrity Edge is so revolutionary and so unique,” said Rzymowska, adding: “Edge is such an outward-facing ship, connecting guests to the sea wherever possible, so we wanted to showcase her in Southampton in the spring rather than in the depths of winter.”

The next generation ship, which launches in October 2018, is Celebrity’s first new build for six years and first of a new class of vessel for a decade.

It will be showcased to the UK travel trade from May 13-15 in Southampton before setting off on a 10-night Iberian Peninsular cruise to Rome, calling at various ports in Spain, Portugal and Italy.

From there, it will offer seven, nine, 10 or 11-night sailings from Rome and Barcelona. Customers wanting to sail for 14 nights can book the two full cruises back-to-back and will call at only one repeat port during the fortnight.

Rzymowska said: “For the UK audience, we expect the 14-night open jaw sailing to be really popular. The only repeat port is Florence, so guests can go to Florence one way, and then Pisa the other.”

Ports of call include Monte Carlo, Capri and Mykonos, along with the likes of Ibiza and Valencia where Celebrity Edge will offer longer evening stays in port.

The ship will also visit two brand new ports – Nauplion in the Peloponnese region of Greece and Santa Margherita, on the Italian Riviera close to Portofino.

Rzymowska added: “We’ve taken a lot of time to really plan itineraries that will appeal to the modern luxury lover. In total, Edge will sail to 30 ports of call, to 10 countries with five overnights in one season [May-October].”

The announcement of Edge’s 2019 summer season in Europe takes Celebrity’s European deployment to five ships, and cements Celebrity’s commitment to the region and its European markets.

Edge’s summer 2019 European season will go on sale at 8pm tonight (Tuesday) and the operator warned agents to be ready for an anticipated surge in calls and bookings.

“We expect there to be quite a race for space for the high-end affluent suites on this ship,” said Rzymowska. She added that all of the line’s 2019 summer deployment would be released at the same time.

Celebrity Cruises has developed a range of supporting materials and assets for the trade to enable agents to promote the new itineraries on their websites. This will include a 20-page direct mailer that agents can over-brand and distribute to their own customers; digital guides, itineraries and images.

Lutoff-Perlo said: “The UK & Ireland is such a significant market for us that we wanted to celebrate the start of her summer season by offering guests the first scheduled European cruise direct from Southampton.

“To further support our key trade partners, we will also be hosting an exclusive 2-night preview, so that our beloved agents have the opportunity to experience Celebrity Edge first-hand.”