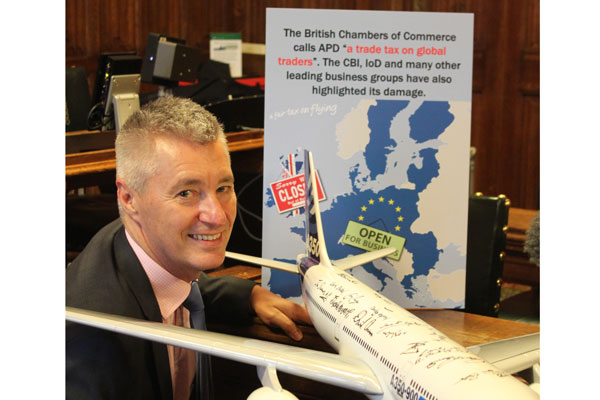 More than 30 parliamentarians attended the A Fair Tax on Flying’ campaign event held in the House of Commons.

Leading members of the campaign argued that the UK’s high level of APD was a ‘tax on trade’ and called on MPs to urge the Chancellor to cut it by at least 50% in his autumn Budget.

There was strong support from MPs from all the major parties and from every nation and region of the UK.

The centre piece of last week’s event was a large model aircraft with ‘A Fair Tax on Flying’ branding which MPs were encouraged to sign as a symbol of their support.

A number of the MPs undertook to write to the Chancellor on behalf of the campaign and agreed to be listed on the afairtaxonflying website.

Campaign spokesman Dale Keller, chairman of Bar UK, said: “This was a very significant level of political engagement and an important part of our overall campaign strategy.

“We were able to put across to many influential MPs our message that APD should be seen for what it is – a ‘tax on trade’.

“We emphasised that the tax is wholly incompatible with the government’s vision for a Brexit ready, global and outward facing Britain, and it needs to be seen ‘in the round’ on its impact on the wider economy and not just as a revenue raiser for H M Treasury.

“Aviation plays a unique role in connecting Britain to global markets and we should all worry that the combination of the highest air passenger tax in the EU and uncertainty is negatively impacting the plans of airlines to develop new routes and grow existing markets from the UK.’”

Keller added: “Building a large cadre of MPs who are prepared to have their support noted on our website is an important step in building up political momentum for the campaign.”