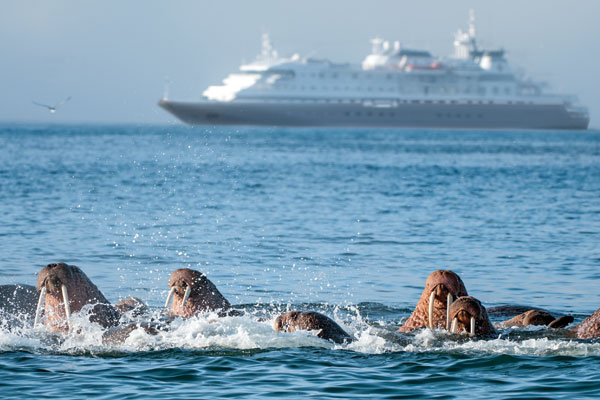 Embrace the spirit of adventure with the latest trend for expedition cruising, writes Jane Archer.

Mudroom, wellington boots and science centres are not words usually associated with cruising, but the times they are a-changin’. Now, cruisers are swapping DJs and cocktail dresses for the thrill of a voyage to places where few people have gone before.

An expedition cruise used to be synonymous with roughing it at sea. The ships were old and basic, often with shared accommodation, but people put up with it because it was the only way to get to places such as the Arctic and Antarctica.

Then the tide began to change in 2009, when Silversea put the luxury in expedition with the launch of Prince Albert II (renamed Silver Explorer in 2011). The ship was not new – it was actually 20 years old – but a multimillion-dollar makeover brought it up as far as possible to Silversea’s standards.

Capacity was reduced, suites were added, and drinks and gratuities were included in the price – all changes that would appeal to Silversea’s past passengers as well as people who wanted to cruise to Antarctica in a bit more style.

Fast-forward eight years and while plenty of the old expedition ships are still around, an incredible 15 new vessels – many of them pushing new boundaries in luxury – are being built over the next two years. Between them, they promise amazing features such as underwater lounges, glass balconies and submarines. No matter how posh they are though, they all also have fleets of inflatable Zodiacs and expedition experts on board to take passengers ashore in remote spots where there are no ports or terminals.

Seabourn’s senior manager of expedition operations and planning, Robin West, says: “Luxury cruise lines have realised that people want to see remote destinations but are not prepared to compromise on the five‑star product.”

Seabourn entered the expedition sector in 2013 when it converted Seabourn Quest into an ice-class ship. The vessel visits Antarctica in the winter and next August will be cruising the Arctic Ocean on a 24-night cruise from Reykjavik in Iceland to Montreal in Canada. 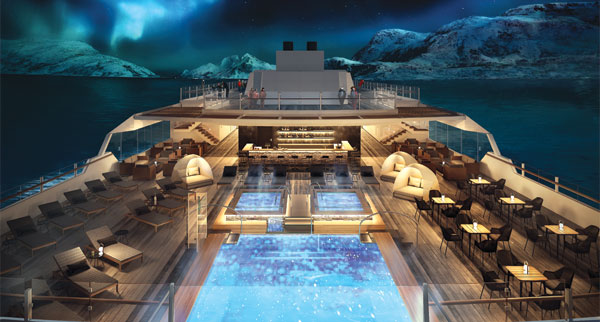 Design of the times

One of the most revolutionary expedition ships on order is Hurtigruten’s Roald Amundsen, which launches in July 2018 and will operate mostly on marine gas but will be able to switch to electric power for up to 30 minutes at a time.

Not only is that good for the environment, but passengers will be able to experience the eerie silence of Antarctica, where the ship will be based from October 2018 to March 2019, even while sailing.

Most cabins and suites on the 530-passenger vessel will have balconies. It will also have three restaurants, an infinity pool, Jacuzzis, a science centre and lecture halls. Sister ship Fridjof Nansen follows in 2019. 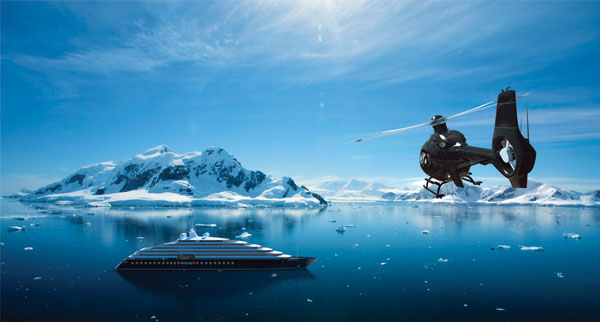 “Luxury lines have realised that people want to see remote destinations but not to compromise on the five-star product.”

For exploring extreme destinations in luxury, Scenic’s Scenic Eclipse is going to be hard to beat. Launching in August 2018, the vessel is being built to the highest ice-class standards for cruising the Arctic and Antarctica, but will accommodate just 228 passengers (reducing to 200 when sailing in the polar regions) in suites with balconies.

It will have nine places to eat, and carry a helicopter, seven‑seat submarine and scuba diving equipment for exploring above and below the ocean, as well as snowshoes, snorkels and e-bikes.

Taking its cue from the company’s river cruise product, almost everything on Scenic Eclipse will be included in the price, from flights and transfers to drinks on board, shore excursions and gratuities (the submarine, helicopter and scuba diving will cost extra). An 18-day Chilean Fjords and Falklands Islands cruise from Valparaiso to Ushuaia, departing November 21, 2018, that visits glaciers and penguin colonies and includes a night in Buenos Aires, costs from £7,845. 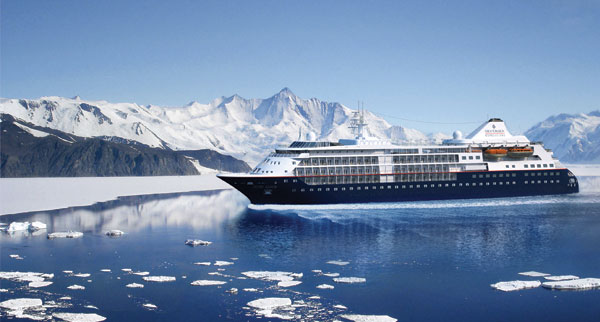 French cruise line Ponant is launching two 184-passenger expedition ships next year that will have a lounge with portholes below the water line and hydrophones beneath the keel so passengers can see passing fish and coral, and hear sounds from beneath the ocean as well.

Le Lapérouse’s launch next June will be followed by sister ship Le Champlain in September 2018. Another two siblings, Le Bougainville and Le Dumont-d’Urville, are due to enter service in 2019. From €7,290 per person cruise-only for a 13-day voyage around the Seychelles on Le Lapérouse departing November 29, 2018, with birdwatching, snorkelling and scuba diving (extra charge) on the agenda.

Hapag-Lloyd Cruises’ new Hanseatic Inspiration is a 230-passenger polar-class expedition ship launching in October 2019 to cater for German and English-speaking markets. It will have an aft marina for water sports and glass-floored balconies that extend either side of deck eight but that can also be retracted – a necessary feature as the ship will be cruising the Great Lakes in the US in summer 2019 and needs to pass through the waterways’ narrow locks. 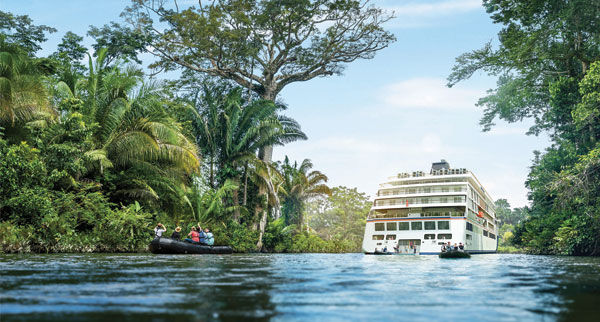 “Penguins and polar bears put the poles on top of the wanted list when it comes to expedition cruising.”

Aurora’s vessel, as yet unnamed, is being built using new X-BOW technology which enables the ship to pierce waves instead of riding them. The company says it will make crossing the Drake Passage between Ushuaia and Antarctica more comfortable.

Seabourn’s Robin West says: “Fear of the Drake puts many people off going to Antarctica but they shouldn’t let it. It’s only a 36-hour crossing and even if the weather is rough, you immediately forget it the moment you set foot on Antarctica.” 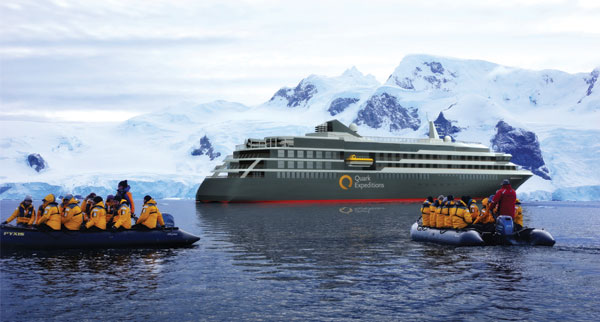 The allure of walking among penguins in Antarctica and seeing polar bears in the Arctic have put the poles on top of the wanted list when it comes to expedition cruising, but there are plenty of other places waiting to be explored on a ship.

Silversea, which now owns three expedition vessels, has island-hopping cruises in the Galapagos and voyages in the Kimberley in northwestern Australia, where highlights include raging rapids and Zodiac cruises in search of salties – saltwater crocodiles to the uninitiated.

It also has cruises along the Central and South American coast and to the remote Kamchatka Peninsula in Russia, where sea eagles, walruses, hot springs and helicopter rides over volcanoes are among the draws.

A fourth expedition ship, Silver Cloud, joins the Silversea fleet in November. Launched in 1994 as a classic cruise ship, it is being converted into an ice-class vessel and will sail in Antarctica this winter and the Arctic in summer 2018. A Silver Cloud module is now available in the Silversea Academy training programme.

There are also expedition cruises to the Falkland Islands and South Georgia, where visitors are rewarded with sightings of thousands of king penguins and millions of sea birds, and through the Northwest Passage, the Arctic seaway that connects Canada with Europe. One Ocean Expeditions has cruises around Canada’s wild east coast. Hapag-Lloyd Cruises sails the icy Northeast Passage across the top of Russia.