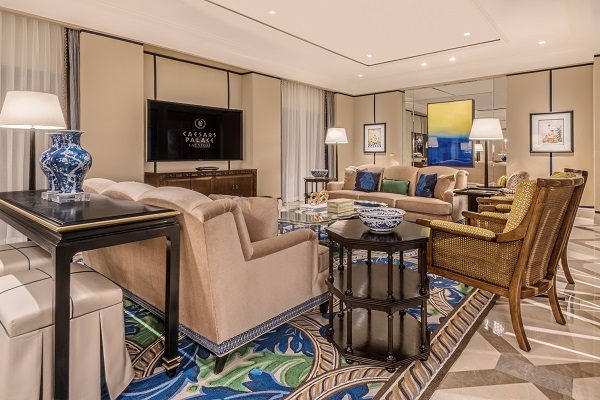 Caesars Palace Las Vegas has completed the $100 million renovation of its Palace Tower.

Among the 1,181 guest rooms and suites, the famous 29th floor features ten new luxury villas with bespoke furnishings and a curated art programme ranging in size from 2,750 square feet to 4,085 square feet.

Its villas, which start at more than $3,000 per night, include imported stone, 24K gold-plated plumbing fixtures, whirlpool tubs and hand-painted wall murals.

“Caesars Palace is known worldwide for its collection of opulent villas, which have hosted some of the world’s most discerning guests, including celebrities, dignitaries and royalty,” says Gary Selesner, president of Caesars Palace. “The completely redesigned Palace Tower, including its luxurious new villas, further diversifies the lavish accommodation and elevated service that distinguishes Caesars Palace as one of the Strip’s leading resorts.”

Caesars says the villas, designed by KNA Design, “blend various architectural styles with an eclectic mix of furniture and décor, resulting in the appearance of a worldly collection of styles worthy of a well‐travelled aristocrat” and include hand-carved furnishings.

Villa guests are entitled to private lift entry to the 29th floor, 24/7 butler service, limousine transportation to and from McCarran International Airport and VIP check-in.

The Palace Tower renovation is the latest in a series of new and renovated rooms at Caesars Palace within the past six years, a total investment of nearly $1 billion.