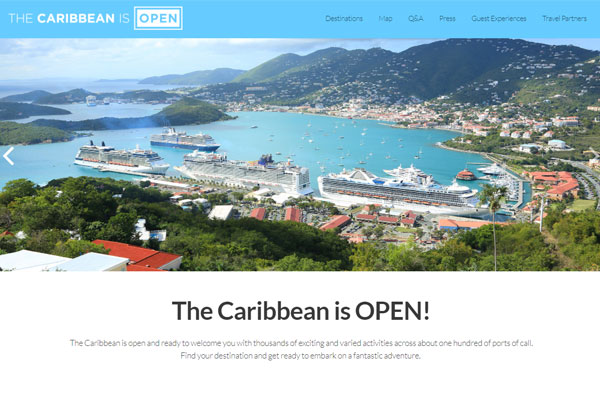 Brands within the world’s largest cruise company have started to return to hurricane-hit Caribbean destinations such as Grand Turk, St Thomas and San Juan, Puerto Rico.

Carnival Corporation brands have operated normal schedules in the aftermath of the September hurricanes, modifying itineraries for only a handful of impacted destinations.

Most of the nearly 100 destinations in the Caribbean have been fully operational since the storms, and the Florida-Caribbean Cruise Association reports that almost 90% of the region is open for business.

Vigorous recovery efforts to restore cruise travel to those affected destinations have led to the re-opening of cruise ports in Grand Turk, St Thomas and San Juan.

The FCCA created a dedicated website last month at www.CaribbeanisOpen.com to generate awareness that the majority of Caribbean destinations are operating normally, unhindered by Hurricanes Irma and Maria.

FCCA president Michele Paige said: “The landing site is an invaluable resource for destinations and cruise lines to spread information about and footage of the beautiful destinations awaiting guests.

“It is crucial to connect with potential travellers and show them that most of the unparalleled experiences in the Caribbean are fully available to them as they plan upcoming vacations, and also to let them know that the best way to show support is to travel to the Caribbean, as the entire region greatly benefits from tourism.”

The website features footage of and updates from destinations, a map showing that nearly 90% of the region’s ports are open and welcoming guests, a Q&A covering questions about visiting the Caribbean and testimonials from travellers.

A Carnival Corporation spokesman said: “The Caribbean covers a far-reaching region of more than one million square miles, so it is important to know the vast majority of its islands realised little or no impact from the September storms, and we have been sailing thousands of guests to the Caribbean for great vacations.

“The Caribbean is the world’s most popular region for cruise vacations – and its people and businesses are not only great hosts to our guests, but they also have a strong spirit and resilience.

“So, for those few islands that were impacted, we applaud them for their tireless efforts to recover and rebound, stronger than ever.

“We are thrilled to have our brands beginning to return to renowned destinations such as Grand Turk, St Thomas and San Juan, and we know our guests will also be happy to have those ports as part of their cruise vacation.”