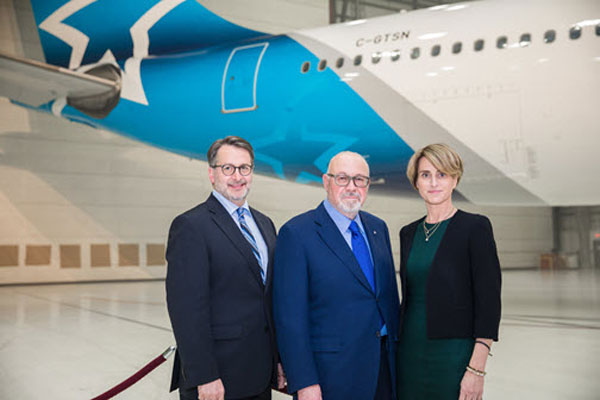 A new look has been unveiled by Air Transat as the Canadian leisure airline marked its 30th anniversary.

The first aircraft with the new livery – an Airbus A330 – will touch down in the UK for the first time on Friday morning at Gatwick.

The revamp was unveiled at an event in Montreal attended by 375 partners and guests.

Air Transat flies year round from Gatwick, Manchester and Glasgow to destinations across Canada, including Toronto, Montreal, Vancouver and Calgary, and offers a summer service from Dublin.

President and chief executive Jean-Marc Eustache said: “I feel a great sense of pride when I look at how far we’ve come since November 14, 1987, when our first flight took off from Montreal bound for Acapulco.”

“And our journey is far from over. While our tour operating business and our aviation operations are tried and tested, our services continue to evolve to meet the expectations of travellers today and in the future.

“We have plenty of innovations coming up, including the new fleet livery and the new hotel division that we are about to create, all in pursuit of our goal of remaining at the forefront of the travel industry.”

Quebec’s deputy premier Dominique Anglade said: “The story of Transat’s growth over the past 30 years is a remarkable one.

“Today, Transat is Canada’s leading integrated tourism company, and Air Transat is the country’s number one leisure carrier. Transat also attracts some 500,000 European travellers each year to Quebec and the rest of Canada, notably from France and the United Kingdom, two major tourism markets.

“Through its operations, this first-class employer generates substantial economic benefits for all of Quebec.”