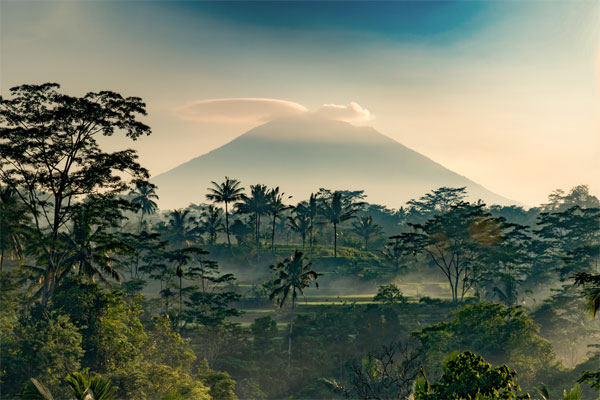 At least 59,000 travellers have been left stranded with the closure of the international airport on Bali for a second day due to volcanic ash being spewed out of Mount Agung.

Up to 3,000 British tourists are reported to be among those affected, wit the Bali Hotels Association estimating that about 9,000 Britons visit the island in November and stay for an average of ten days.

More than 400 flights were cancelled due to the 24-hour shutdown of Ngurah Rai (Denpasar) airport on Monday morning local time.

The closure was then extended until Wednesday at 7am local time by the Indonesian transport ministry.

Up to 100,000 people have been ordered to evacuate the vicinity of the volcano as officials raised the alert to the highest level on Monday, fearing an imminent major eruption.

Massive plumes of dark ash were seen reaching as high as two miles above the summit of the volcano, which began erupting last week.

Sutopo Purwo Nugroho, spokesman for Indonesia’s national disaster agency, said that the ash was being drawn south-west – towards Bali’s main airport – by a tropical cyclone in the Indian Ocean.

However, the airport on neighbouring Lombok island has been re-opened, he added. Authorities have also arranged for buses to take tourists to ferry terminals.

The volcano is about 70km from the popular tourist areas of Kuta and Seminyak.

The Foreign and Commonwealth Office updated its travel advice yesterday to warn against all travel to within 10kms of Mount Agung due to ongoing volcanic activity.

“Volcanic activity may increase in the coming days,” the FCO cautioned. “If you’re elsewhere in East Bali, continue to follow the advice of the local authorities, monitor local media, keep up to date with our travel advice and be aware of the health risks of any significant ash fall, particularly if you have pre-existing respiratory conditions.”

Abta insisted that there would only be a “relatively small number” of UK holidaymakers on the island at this time of year.

“Volcanic ash clouds could continue to cause flight disruption and may result in further airport closures in the region.

“Anyone due to travel to the region imminently should check with their travel provider or airline to establish if their holiday or flight is affected,” the association said.