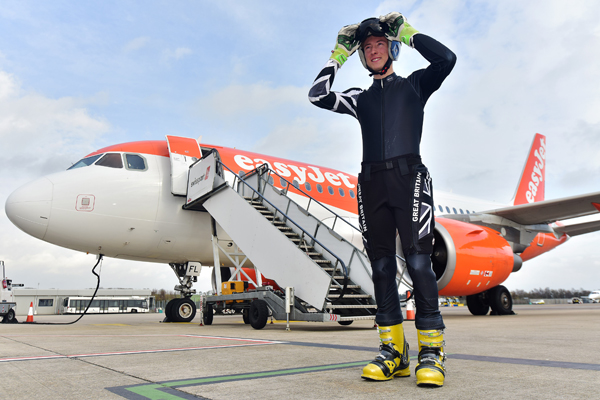 A young British member of the Great Britain Telemark ski team has secured sponsorship from easyJet.

Twenty-year-old Ben Emsley, an engineering and maths student at the University of Bristol, is being provided with flights from the airline to enable him to train to his full potential, and compete internationally.

He flew to Geneva for two weeks of training in the snow sport in November, and has travelled to the Austrian World Cup this week – the first of many competitions numerous he will compete in for the 2017-18 season.

Emsley started Telemark skiing when he was 16, and was selected to represent Great Britain after placing second in his age category at the French Championships, and fourth overall.

The sport focuses on carving, combining elements of alpine racing, Nordic skate skiing and ski jumping. It is hoped to feature as an event in the 2022 Winter Olympics.

Emsley said: “Funding is currently very limited within Telemark, so it can be really hard for me to travel internationally for training and World Cup events.

“Without easyJet’s support, I wouldn’t be able to compete in a lot of the upcoming World Cup events this season.

“I am determined to have a strong season on the Telemark circuit, and also spread awareness of the sport as much as possible to make it more recognised.

“The Telemark community has been campaigning really hard to raise awareness so that we feature as an event in the 2022 Winter Olympics.”

The airline’s UK country manager Ali Gayward said: “We are proud to be sponsoring Ben Emsley as he represents Great Britain in Telemark Skiing.

“EasyJet offers more to Europe’s ski destinations than any other airline in the UK, so we’re really excited to be supporting this talented athlete, helping him to train and compete in amazing destinations such as the Alps.”