The dynamic cities of New York and Philadelphia are an easily-accessible twin-centre which show off America old and new, writes Ella Buchan.

Few cities complement each other so deliciously as New York and Philadelphia. Each of these dynamic East Coast cities dishes up generous helpings of world-class dining, culture and history. Visited together, they are irresistible.

“Start in New York, where my top tip would be to really plan in advance to make sure you can fit in all the incredible things to see and do,” suggests Ross Sinclair, senior product manager for Americas and the Caribbean at Gold Medal. “Then explore the Birthplace of America, Philadelphia, home to the Liberty Bell and Independence Hall where the Declaration of Independence was debated and signed.”

Here’s a taste of what’s happening in two of America’s most exciting cities. 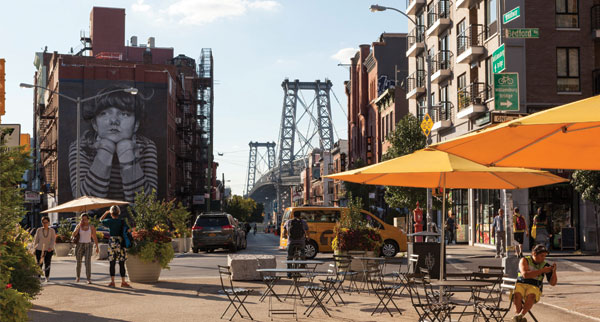 No matter how many times you have visited the city, no trip to New York City ever tastes the same. There are always shiny new attractions to visit, innovative tours to take and fresh neighbourhoods to explore.

The hotel boom shows no signs of slowing, with options for every budget in the five boroughs of Manhattan, Brooklyn, Queens, The Bronx and Staten Island. Right in the centre of the action is Moxy Times Square, the latest from Marriott’s funky, affordable brand. High-tech, compact rooms and the city’s largest all-season rooftop bar make this a hip hotspot.

It will be joined, from early 2018, by EDITION Times Square, whose rooms have oversized windows for views sweeping over Madison Square Park to the Empire State Building.

Midtown Manhattan has always been a must-visit but these hotels – and other new family-focused attractions – are giving the area a modern makeover.

For those looking for new streets to explore, recommend hip Williamsburg in Brookyln, where London hotel brand The Hoxton makes its US debut early next year.

The city has no plans to rest up. Hudson Yards, the largest private retail development in US history, continues to bloom with shops, boutiques and restaurants. Its highlights will include a Spanish food hall from José Andrés, who trained under El Bulli chef Ferran Adrià.

The world’s first underground park is due to open in 2021 on Manhattan’s lower east side. Mirroring hugely popular elevated park the High Line, the 60,000-square-foot Lowline will use solar technology to allow plants to grow and flourish. 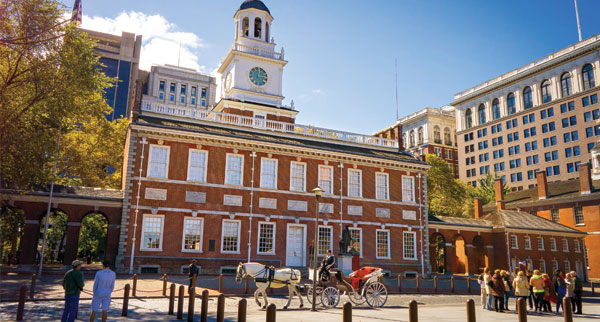 Suggest clients pack comfy shoes and a big appetite when visiting Philadelphia. This east coast gem is a walkable smorgasbord of delicious food and drink.

Historic Reading Terminal Market, which opened in 1892, makes a delicious introduction. Stalls dish up everything from the famous Philly cheesesteak to salted caramel doughnuts.

New additions to the dining scene include Harp & Crown, a vintage-inspired hangout from chef Michael Schulson. Near the popular public plaza of Dilworth Park, the restaurant has a seasonal menu, cutting-edge cocktails and a basement complete with bowling alley.

Unsurprisingly, food is central to the new Total Philly Tour. After grazing at Jewish delis and the open-air Italian Market, guests can attempt to walk it all off in the historic district. Sights include public art and mosaics in the Bella Vista neighbourhood and Magic Gardens before trying another Philly obsession with a flight of microbrews.

Between bites, suggest a visit to the new Museum of the American Revolution. Open since April, its four floors whisk visitors through the nation’s founding.

The Franklin Institute has long been a favourite and now it’s casting fresh eyes on the world through its Virtual Reality Experience. Visitors can travel through outer space, encounter a blue whale or peek inside a human brain. Until March, the museum also has China’s Terracotta Warriors on display.

The city’s hotel scene is expected to grow by 20% by 2018. New properties include a Four Seasons. The hotel will occupy the top floors of the new 60-storey Comcast Innovation and Technology Center – Philadelphia’s tallest tower.

From April 2018, British Airways is increasing its weekly flights from London Heathrow from seven to 10 per week – making it easier than ever for visitors to get a taste of this endlessly appealing city.

Gold Medal offers a six-night New York and Philadelphia itinerary from £929, including three nights B&B at the three-star Hotel Metro New York, and three nights room-only at the four-star DoubleTree by Hilton Philadelphia Center City. The package includes economy-class flights from Heathrow and domestic connections, and is valid for departures from January 15 to February 8, 2018.

We have three Fitbits and three Amazon Echo speakers up for grabs. To be in with a chance of winning, simply check out our six What’s Hot in the USA features between now and December and answer a question on each. This week’s prize is an Amazon Echo, and to be in the running, head to comp.travelweekly.co.uk/whatshotusa. You can also check out all our What’s Hot in the USA features at go.travelweekly.co.uk/whatshotusa