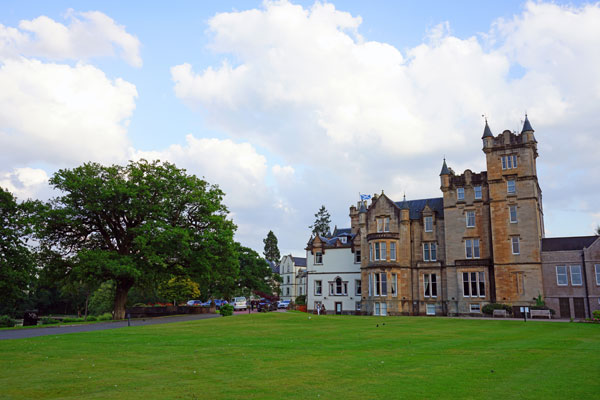 Two people died in a fire at Cameron House Hotel on the banks of Loch Lomond in Scotland.

One person was pronounced dead at the historic five-star hotel, near Balloch, while another died after being taken to hospital.

A recently-married couple and their young son were also taken to hospital but were later discharged.

Many of the 200 guests who were evacuated returned home while others were transferred to nearby lodges.

Police Scotland said the full circumstances surrounding the fire had yet to be established.

It is believed to have started at about 6.40am on Monday, and at its height 14 fire appliances and more than 70 firefighters were tackling the blaze.

Cameron House resort director Andy Roger told the BBC: “Tragically, the authorities have confirmed two fatalities from the fire. In addition, three individuals were transported to the local hospital, but have since been discharged.

“The safety and well-being of our guests, employees and neighbours is our first priority, and our deepest condolences are with the families of those affected.”

A Police Scotland spokeswoman said they were working with the Scottish Fire and Rescue Service to try to determine exactly how the fire broke out.

Cameron House Hotel also said it was working closely with investigators to identify the cause of the fire.

Cameron House said it would remain closed for at least the next 72 hours while it worked to assess the damage.