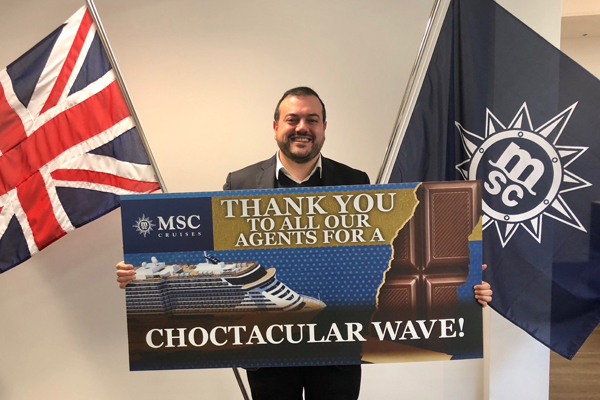 A record-breaking start to the wave peak booking period is being claimed by MSC Cruises UK & Ireland.

The line is 32% up year-on-year following the best ever two weeks of trading.

Excellent trade relationships are being cited for the uplift in numbers.

UK and Ireland managing director, Antonio Paradiso, said: “We’d like to say a huge thank you to the trade for their dedication and support in what promises to be another record breaking year.

“We have seen huge engagement from the trade which has allowed us to continue to expand our distribution and further our commitments through incentive activities such as the MSC Choctacular promotion.”

He added: “There is no doubt that the new ships are driving sales and as a result we are seeing an increase in both volumes and rates.

“Passengers are willing to spend money on higher ticket products such as the Yacht Club or on the new ships which is testament to the increased confidence in our brand.”

The company is giving away thousands of MSC chocolate bars between January 2 and February 28 in a #MSCChoctacular giveaway.

Inside the bars are ten golden tickets with the winners being given a place at the MSC Seaview christening celebrations in Rome in June.

Sales director Steve Williams said: “In 2017 we doubled the size of the sales team which has allowed us to increase agent engagement and our presence on the high street.

“In order to further our commitment to the trade we are expanding the sales team and are now recruiting a regional sales manager for the north-east. The sales manager will be responsible for providing hands on support to the agents in this area where there is high, consistent demand.”

More: MSC Cruises to increase capacity out of Southampton in 2019