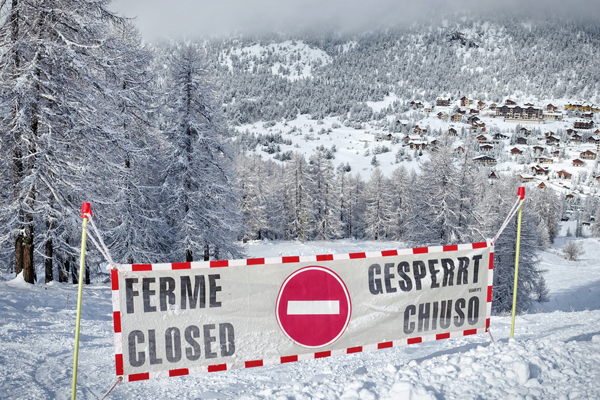 More ski resorts in the Alps have been cut off due to heavy snow and a heightened rick of avalanches.

As many as 9,000 people are reported to be stranded in Zermatt for the second time this month as well as the nearby Italian resort of Cervnia.

Links were cut to the Austrian resorts of St Anton and Ischgl while ski lifts were halted in many areas, including Chamonix in France.

Connections to Davos in Switzerland where world leaders are gathering for the annual World Economic Forum were temporarily closed with more than 30 homes evacuated.

Some parts of the Swiss Alps have had 9.9ft of fresh snow in just one week – a level last reached in 1999.

The Foreign and Commonwealth Office said In a revised travel alert for Switzerland yesterday: “Due to heavy snowfall in the mountains, there is an increased risk of avalanches.

In the regions of Valais, Central Switzerland and Graubünden, several villages are cut off due to the closure of road and train connections. This currently includes Zermatt, Andermatt and Samnaun.

“Road and rail connections to Davos have now been restored after a temporary closure, but there remains a high risk of avalanches. At this stage the World Economic Forum is not affected.”