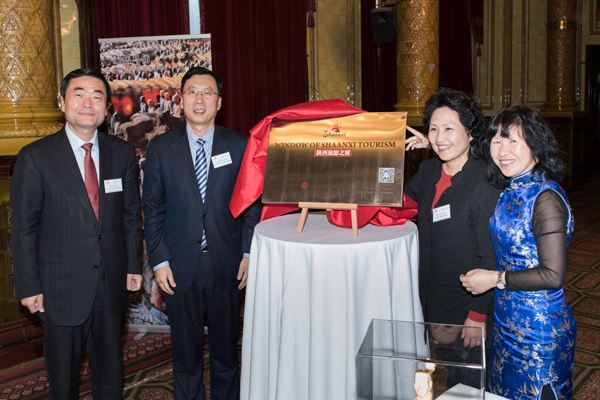 Wendy Wu Tours has officially launched its tourism partnership with China’s Shaanxi region with the promise of signficantly strengthened ties between the UK and China.

The operator signed the agreement with the Shaanxi Provincial Tourism Development Commission today at the Royal Horseguards Hotel in London in front of delegation of senior Chinese and UK tourism officials.

A plaque was unveiled called the “window of Shaanxi tourism”, referring to opportunties that would be opened up as a result of the deal.

The region in northwest China is home to the Terracotta Warriors and its ancient capital Xi’an was a starting point for the Silk Road. In 2017, 3.8 million people visited the region, including 154,000 Brits – the third largest inbound market.

Founder Wendy Wu, speaking afterwards, said she expected the partnership to lead to an increase of 10% to 30% in the operator’s passenger numbers to the region over the next 12 months but stressed it would have a more far-reaching impact on relations generally between the two countries.

She said: “The significance of this partnership goes far beyond Wendy Wu Tours because it will help British travellers and the tourist market to understand and have access to the assets they have in the Shaanxi province.

“We can showcase their region to the UK market and feed back what the UK market wants. If they want to do advertising and promotions to travel agents we can direct them to the right channels. We can help improve the tourist infrastructure and introduce businesses to the region, which is a hub for technology and industry.”

Rebecca Stewart, senior policy advisor, tourism, for the Department for Digital, Culture, Media and Sport, speaking at the event, said: “Great progress has been made in our relations in the last two years but we believe we can be even more ambitious, extending our cultural and tourism partnership to embrace more cultural institutions in the UK and across China.”

A direct flight is due to be launched in the near future between Gatwick and Xi’an by Tianjin Airlines. Currently, flights operate via Chongqing.

Wu added: “This flight will make a huge difference, Xi’an is one of the most popular destinations in the world. This will give us a mission to push tourism to the next boundary for deeper cultural exchange.”

Wendy Wu Tours announced it would be inviting 1,000 of its UK clients to a prestigious welcome ceremony on September 12 this year in the ancient city of Xi’an to mark the new partnership. Any holidaymakers on the operator’s tours in Xi’an on that date this year will be given the chance to attend the large-scale event.

Wu said the operator would also be the first to include the world’s largest panda reserve, planned for the Shaanxi region, in its tours. Building work for the reserve has just started, but no date has yet been revealed for its completion.

In addition, the operator announced it would be developing a range of medical tourism trips across China over the next 18 months for the first time.