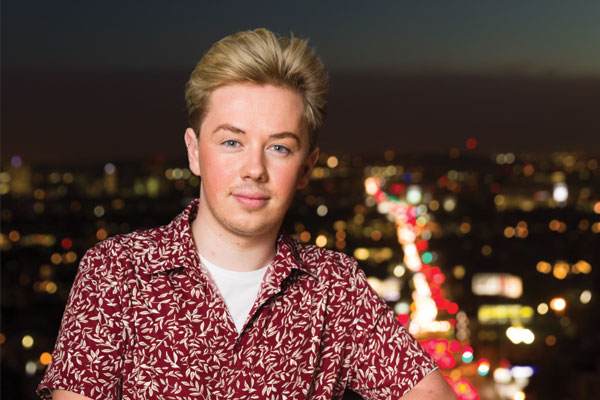 Q. You were upgraded to business class by our airline sponsors. How was that?
A. It was amazing. On the way out, half of us went with American Airlines and the others went with British Airways. I was glad I got to go out with AA because we all flew back with BA and I got to see both. Each gave amazing service, but you could tell the difference. American was more laid back while BA was all about a certain etiquette. The food was incredible. I can now tell customers the benefits of flying business-class.

Q. Where did you stay in LA?
A. We stayed at the Mondrian. I was lucky because I had the biggest room of our group. It was on the corner of the building with impressive views over the Hollywood Hills. Everyone nosed around each other’s rooms and were jealous of mine. It was modern, boutique and had lots of interesting ornaments. We saw on Instagram that Jess Wright, from The Only Way is Essex, checked out the day we checked in.

Q. It’s the world’s celebrity hotspot. Did you see any other famous faces?
A. We went for dinner at Sunset Tower Hotel, where we saw Jennifer Aniston and I walked straight past Bill Murray at reception. It just shows stars are normal people. We also went on a cycle ride of Beverly Hills and saw some famous people’s mansions. We saw the Osbournes’ house, Dr Phil’s and the house that Michael Jackson passed away in. They were great houses but I couldn’t help thinking that they could have done better, given their wealth.

Q. What’s it like wandering around LA?
A. It’s weird, in a good way. Everything looks just like it does in the films. You’d think it would be more real-life than the movie sets, but it looked like what you see on the screen. We were looking at the Hollywood sign when I had to jump in an Uber to get to my photo shoot, it all felt very LA.

Q. Where exactly was your photo shoot in West Hollywood?
A. It was on the balcony of The Jeremy hotel with a street below. It was eventful as there was lots of people beeping and shouting – they must have thought I was someone famous. A couple was also having a domestic on the street below. We put music on, so I’m there listening to Beyoncé and feeling like a film star. I usually wear just black but I went for a maroon-coloured shirt with white feathers on it, something I wouldn’t usually wear. I thought it’d be daunting, but I relaxed into it.

Q. What was Pismo Beach like?
A. We went dune buggying, which was scary but fun. We were told to go up the hills slowly because you never know what’s on the other side. People were sceptical about my driving, which is fair because I think I almost killed [fellow cover star] Sam. You could go 10 minutes without seeing anyone, and when you did see them they were usually stuck.

Q. How did you find Santa Cruz?
A. I loved it, it was totally unique and my favourite place. I loved walking along the boardwalk and we went on a boat ride where you could see these incredible views all across the city. We saw otters too, which looked really lovely, but our guides told us they can be vicious. We then had a party on the beach with a fire, which is where I learnt how to make s’mores out of crackers, chocolate and marshmallows. It was all so surreal, I could have pinched myself.

Q. Were there any other highlights?
A. We went horse riding on Creston Ranch with Central Coast Trailrides, where we saw a completely different side to California. Aside from two horses having an altercation, which was pretty scary, it was so serene. The owners were saying how they sometimes just sit out under the stars. I’d 100% go back and will be suggesting this to customers. We also went on a zipline in Mount Hermon in Santa Cruz. We were all really nervous, but once we started it was really fun.

Look past LA and San Fran when you’re selling California, there’s so much else going on.

Business class is a treat, always offer it on special occasions and when it’s on a good upgrade deal.

The food in California was incredible. I love real American-style food and it was everywhere. I’d heard about In-N-Out Burger, which is from California and only available in certain states. We went to some great restaurants on the trip but I spent the whole time looking for an opportunity to have one of these burgers. I finally found it on the way to the airport on the way home. It was amazing. It’s the greasiest burger I’ve ever seen and our guide from Visit California told me I had to have it with ‘Animal Fries’, which were insane – so much melted cheese. In LA, I had steak every night – it seemed like the thing to do when you’re in Hollywood.