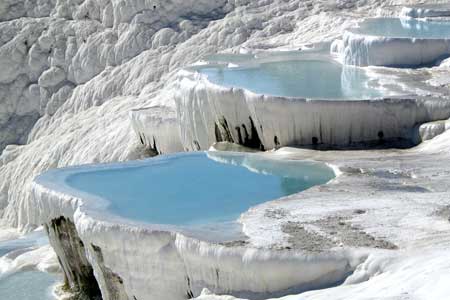 For ancient ruins, awe-inspiring scenery or a relaxing float on a gulet, clients will love pound-friendly Turkey. Joanna Booth takes a look

Turkish tourism is booming. The country has overtaken Spain as the UK’s favourite destination and, as the value of sterling falls, it’s a great place to make pounds go further.

Turkey’s beach resorts are a magnet for Brits on holiday, but there are still plenty of corners of this vast and varied country where it’s possible to avoid the large tourist crowds and find adventure, culture or relaxation.

Operators are helping you send your clients off the beaten track by increasing capacity to these areas and launching new tours.

Airlift is increasing – Flyglobespan now links to Dalaman from Glasgow, Aberdeen and Edinburgh from April to November, and from May 4 Pegasus Airlines will fly direct from Stansted to Bodrum twice a week. It will also bump flights from Stansted to Istanbul up to five times a week from this April.

New for 2009 from Explore is a Lycian Village trip, where visitors walk the Lycian Way, spending nights in homestays with local families. A budget tour covers the major sights using public transport and two or three-star accommodation.

Explore can take walkers up Mount Ararat – one to conquer for those who’ve done Everest base camp and Kilimanjaro.

Intrepid Travel has introduced its independent tours for the first time in Turkey, with seven itineraries, plus two overland tours which journey down from Istanbul through the country and on to either Iran or Syria.

Cadogan has added new cities on the Turkish Riviera, plus new experiences to the historic sights of Perge and Aspendos, near Side, and a one-day gulet cruise.

There are few sights more other-worldly than Cappadocia’s strange moonscape, located in the centre of the country.

Vast spikes of rock stretch as far as the eye can see, and travellers can even stay in hotels built into these ‘fairy chimneys’ in the village of Goreme, after a day walking among (or hot-air ballooning over) them.

Yet another surprise comes when visitors find what is hidden beneath these rocky landscapes. There are more than 200 underground cities littered around, but the two most famous are Derinkuyu and Kaymakli.

The latter stretches four storeys below ground, the former a massive eight. Both were built by the early Christians as hiding places, and are fascinating to explore.

Nearby is Konya, home to the famous Whirling Dervishes – a Sufi Muslim sect known for performing a meditative dance characterised by spinning.  See video below

Walking the Lycian Way gives access to some of the most stunning views in Turkey. The southwest coast is beautiful, with azure seas backed by pine-forested mountains and tiny unspoilt villages.

The quaint harbour town of Kas is becoming better known, as is the fjord-like Butterfly Valley, outside Olu Deniz.

Further east, earthquakes caused part of Kekova island to sink into the sea, and it’s possible to cruise or kayak over the submerged city.

For clients seeking a relaxed way of taking in the sights between Fethiye and Olimpos – including Kalkan, Kas and Kekova – suggest they board a traditional gulet. From one of these, they can swim and snorkel, visit on-shore sights or simply lie back on the deck in the sunshine.

Send lovers of all things historic to Turkey’s western edge, running along the Aegean coast. They’ll hardly be able to move without tripping over a Greco-Roman ruin, including the famed remains of Troy, Aphrodisias, and Pergamum.

Outside of Selcuk visitors gather to see where the mighty city of Ephesus once stood. Sections still exist, including parts of the Temples of Artemis and Hadrian, the pillared Celsus Library and an impressive amphitheatre.

Those who prefer more recent history won’t want to miss a trip to the Gallipoli Peninsula, where Allied troops suffered huge losses during the First World War.

It’s not all about the efforts of man, however – one of the most breathtaking sights in this area is a natural wonder which has been used as a spa since Roman times.

Few tourists venture deep into the eastern end of Turkey, but those who do are generously rewarded. It’s definitely one to sell to clients who relish getting off the beaten track.

Recommend the Greek Orthodox monastery at Sumela, set into a sheer rock face; and the ruined ghost town of Ani, where incredible painted churches survived ransacking by Mongol hordes in the 13th century.

There’s also the strange and opulent Isak Pasha Palace, beehive-shaped houses in the village of Harran and the vast stone heads at Nemrut Dagi – the remains of a temple mausoleum dating from the 1st century BC.

They can take a boat trip across Lake Van, shop at the bazaar in Urfa, or even – if they’re fit enough – climb Mount Ararat. At 5,200 metres, this is the height of Everest Base Camp and should be a must-do on any adventurer’s list.