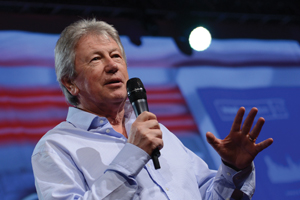 Travel Counsellors founder David Speakman has slammed the Atol system claiming it “plays into the hands” of big operators and airlines.

Speaking at the Scottish Passenger Agents’ Association (SPAA) 88th annual dinner this week, Speakman agreed with Abta chief executive Mark Tanzer, who had said customers will expect the same free repatriation in the event of any future airline failures following the collapse of Monarch.

However, he added: “I agree with Mark, but for a different reason. Customers paying in advance expect not to be stranded. It’s always amazed me that some in travel believe customers should pay to protect the loss of their own money. Customers don’t. Could you imagine the misery of being stranded abroad, maybe with your family, with no resources to return home? And what about the reputation of the industry? What about the compassion? The humanity? People have paid in good faith.

“Mark and Abta’s intention is to create a level playing field for operators which suits its big tour operators and forces every agent to become Atol-bonded, making it as difficult and expensive as possible to compete with [the operators].

“The Atol system is flawed, it takes little account of the industry that in the last 30 years has changed from packages to dynamic component parts. It does not protect all customers. All this complexity about packages, flight-plus, 24-hour room, linked arrangements, misses the biggest single risk – airline’s going bust.

“Airlines that turnover and risk billions of pounds of customer money are not bonded, yet a small mom and pop agency has to be.”

After listing OTAs, direct-sell, self-packaging and discounting as obstacles to the traditional agent, he said: “Good travel agents have survived. The biggest casualties have been the multiples. In the future, I see more agent groups giving full financial protection to customers.”

“This [sort of treatment of customers] is nonsense. It’s damaging to the industry.”

Speakman predicted that in the future companies will be judged by the experience they offer the customer, not the products they provide.

“As the world gets increasingly complex, people will look for someone they can trust. Someone that makes them feel safe, cared for and valued. Travel agents are the gems of the industry and have an opportunity to be the travel voice of the people. They must be willing to advise, deter, criticise suppliers without fear or favour, commission should never replace the impartiality of the agent.”

“There is a great future for the travel agent that gets it and understands they are the champion of the customer and not the promoter of supplier.”