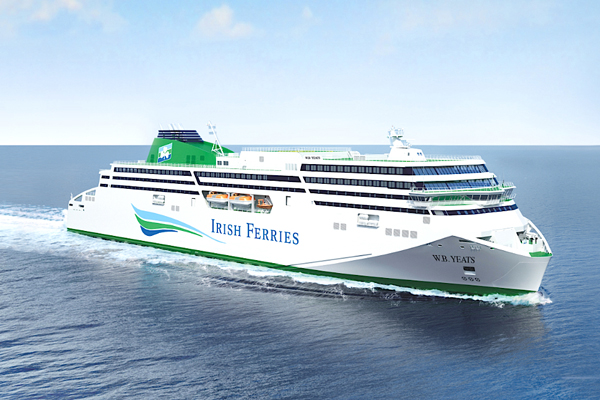 Irish Ferries has been forced to cancel a number of peak summer sailings due to delays in delivery of a new ship.

The company had planned to introduce the W B Yeats on the Dublin to Cherbourg route on July 12.

But a delay in the delivery of the vessel means lost capacity is being taken up on existing ferry Oscar Wilde on the route at a cost to the company of €2.5 million.

Parent company Irish Continental Group said today: “In the interests of minimising the level of disruption to passengers, a decision was taken on 20 April to immediately notify affected customers that Irish Ferries had to cancel a number of sailings and the company activated its contingency plan of releasing capacity on the Oscar Wilde sailings to France which had been held back in case there was any delay in the arrival of the W B Yeats.

“This precaution in holding back peak summer capacity on the Oscar Wilde has cost Irish Ferries approximately €2.5 million in lost revenue.

“However, this action facilitated disrupted customers by offering them an opportunity to sail the day before or the day after their planned sailing, while giving customers three months’ notice of the change.

“Customers were also offered the option of a full refund. All affected customers received a voucher for €150 towards a sailing to the Continent in 2019.

“Irish Ferries deeply regrets this inconvenience to our passengers which is due to an extraordinary event beyond its control.

“At this stage 94% of customers have chosen the option to reroute on alternative Irish Ferries routes, 5% have sought a refund with 1% yet to decide.”

The decline was attributable to lower external charter income following the sale of a vessel in June last year and the re-deployment of another ferry.

The performance came in the “seasonally less significant period for tourism,” according to Irish Continental Group.

Overall group revenue for the first four months of the year was up by 1.4% to €96.4 million.

“It should be noted that ICG’s business is significantly weighted towards the summer period when a higher proportion of the group’s operating profit is normally generated,” the company said.

“Fuel costs continue to be impacted by higher global fuel prices compared to the previous year.”