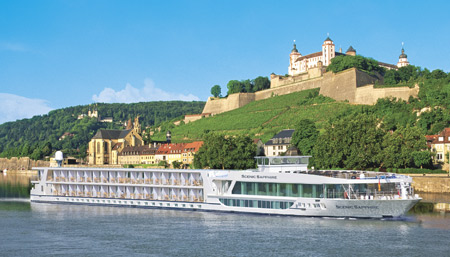 River cruising is going from strength to strength, with new operators, new itineraries and new vessels coming into the market for 2009.

Some 118,000 Britons took a river cruise in 2007, according to the Passenger Shipping Association. It has not released numbers for 2008, but river cruise operators expect it will have increased, and will rise again this year despite the downturn.

Viking River Cruises chairman Graham Clubb said: “Demand for river cruises generally has accelerated hugely. We are up 80% year on year. The recession is not affecting our age profile.” Viking has recently launched a travel agent microsite to support sales through the trade.

A lot of the growth in river cruising has to do with the fact that more people are cruising generally and many people who have been on ocean-going ships are keen to try the rivers, but river cruise operators can also take much of the credit.

They have been working hard to raise the profile of river cruising, both among consumers and with agencies, several of which have launched dedicated river cruise websites over the past couple of years to focus on the sector.

Scenic Tours entered the river cruise market in its own right last year – it had been previously selling Viking River Cruises – when it built and launched two of its own ships.

Another two will be launched this year (see page 40). Scenic offers a five-star cruise with flights, transfers, excursions, gratuities and wine with lunch and dinner included in the price. Suite passengers receive butler service.

Swan Hellenic is making a return to the rivers this year, eight years after quitting over poor standards, with a season of seven and 10-night cruises on the Danube, Rhône and Saône.

The cruiseline has teamed up with German company A-Rosa to offer the river cruises. Danube cruises will be on A-Rosa Riva, which has 100 cabins and capacity for 200 passengers, Rhône cruises on A-Rosa Stella, which has 86 cabins and holds 172 passengers.

River cruise operator Phoenix Holidays, launched in January 2008, has started selling through the trade. The operator was created out of the ashes of Travelscope, which went into administration in 2007.

Travelscope operated eight river cruise vessels; Phoenix operates one, Arlene, which holds 100 passengers and cruises seven rivers between Holland and the Danube, including the Mosel, Saar and Neckar.

The ship is sold as a three-star-plus, with all drinks, excursions and gratuities included in the cruise price, as well as travel by coach. An air option is available on request.

Managing director Darren Parris said: “We have about 400 agents selling for us and we are trying to build this up. I have a team of five people seeing agents and I try to
get to see at least one a week.”

Viking River Cruises will be offering rail travel to all its Rhine cruises in 2010 after demand for rail-cruise, introduced this year, “surpassed all expectations”.

Managing director Wendy Atkin-Smith said there was so much demand for the four rail-cruise itineraries featured in the first-edition brochure that a fifth itinerary was added.

She said rail cruises will be offered in the winter programme out at the end of March and Viking is looking to offer rail-cruise on certain Danube itineraries next summer.

Passengers booked on Elegant River Cruises’ Enchanting Danube cruise from Passau to Budapest on May 3 will be joined by Guy Young, president of US-based Uniworld, which owns the river cruise vessels operated by Elegant.

Additional tours added for the occasion include a morning at the Spanish Riding School in Vienna, a Mozart and Strauss Concert at Palais Auersperg in Vienna and dinner at Griechenbeisl. Prices start from £1,795 including flights, transfers, excursions and wine with dinner.

AMA Waterways is launching a Vietnam, Cambodia and the Riches of the Mekong cruise in September. Clients can choose an eight-night cruise-only holiday or a 15-night itinerary that includes time in Hanoi and Ha Long Bay and Siem Reap. Prices have not been confirmed.

French river cruise operator CroisiEurope has teamed up with DFDS Seaways to offer a selection of ferry-cruises.

A five-night Tulip Time in Holland ferry-cruise departing Newcastle on April 16 costs from £432 per person and includes two nights on the ferry, three nights’ river cruising, transfers and all meals.

A nine-night Amsterdam-Strasbourg ferry-cruise departing Newcastle on April 27 costs from £949 per person and includes two nights on board DFDS Seaways, six nights’ river cruising, all meals while sailing, transfers and one-night half-board in Maastricht.

Cosmos Tourama is offering a new seven-night Majestic Rhine and Moselle voyage for Cologne and back to its river cruising programme from May 17. Prices
start from £679 per person including flights and transfers and all meals on board.

Viking River Cruises launches the 189-passenger Viking Legend in April. It has some of the biggest suites at sea and will offer room service for the first time. The vessel will be sailing 14-night cruises between Amsterdam and Budapest. Prices start from £2,140 per person including flights and transfers.

Scenic Tours is launching two new river cruise vessels, in April and May this year. Each will have capacity for 168 passengers and 85% of cabins will have balconies, with room to sit outside. All cabins are equipped with flat-screen TVs and DVDs.

AMA Waterways is launching two new ships this year: Amalyra and Amadolce. The 148-passenger Amalyra will be christened at Vilshofen, Germany, on Easter Sunday, during its maiden cruise departing Budapest April 6. Amadolce launches in May. Another two river cruise vessels are due to launch in 2010.