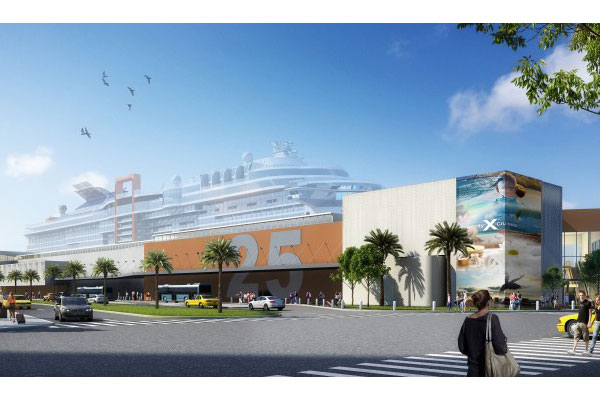 Celebrity Cruises has unveiled details of its first dedicated cruise terminal due to open ahead of new ship Celebrity Edge entering into service.

Terminal 25 (T25) is due for completion in late October at Port Everglades in Florida.

The building will handle many if the line’s ships during their winter deployment, including Celebrity Edge, Celebrity Infinity, Celebrity Reflection and Celebrity Silhouette.

The building has been designed to complement “the sophistication” of Celebrity Edge featuring cutting-edge technology and a sleek design.

The terminal will be open to other cruise lines when not being used by Celebrity.

Port Everglades handles about 335,000 Celebrity Cruises’ passengers a year, representing about nine per cent of the total.

The line is expected to generate nearly 500,000 travellers at Port Everglades once the new cruise terminal is completed, representing 14% of the port’s projected passenger traffic.

Port Everglades chief executive and port director Steven Cernak said: “We are replacing two smaller and out dated cruise terminals with an innovative facility that is inspired by the sleek, futuristic design of Celebrity Edge and can accommodate some of the world’s largest cruise ships.

“The time was right to build a new Terminal 25 that uses cutting-edge technology, such as electronic media-mesh for innovative messaging, to attract contemporary travellers who want to explore the world.”

Celebrity Cruises president and CEO Lisa Lutoff-Perlo said: “When designing the revolutionary Celebrity Edge, we knew we wanted to design a terminal that perfectly complemented the ship and matched its one-of-a-kind experience.

“With cutting-edge technology, in service of a gorgeous design, T25 is that perfect new home.

“T25 also happens to be Celebrity’s first ever brand-designed cruise terminal, which not only represents a milestone for Celebrity, but also presented us with the opportunity to set yet another standard in design and create the perfect guest experience.”