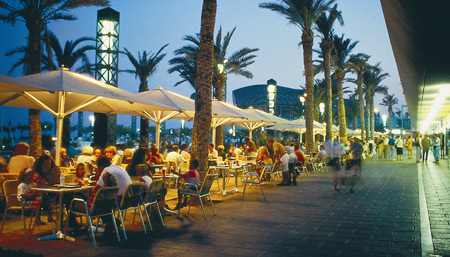 Clients are often torn between a beach or city break, particularly when they’re travelling to Spain. So why not tick all the boxes and offer them both?

Spain has the widest choice of beach-city destinations of any country in the Mediterranean. Here’s a selection…

Best for: beach bums and golfers

Why: To many visitors to the Costa Blanca, Alicante represents little more than an airport serving Benidorm, La Manga, Denia and Calpe. This does the place a great disservice – not only is Alicante a very Spanish city, but it has probably the best and most accessible city beach in the Med.

Playa del Postiguet is just yards from the city centre and next to the picturesque marina. In summer the beautiful people from Madrid descend upon Alicante and strut their chic stuff on the sand. For the rest of the year, it’s just you and the locals.

Alicante enjoys the mildest winter on mainland Europe, so when the mercury drops perilously low in many Med playgrounds, it’s still ‘Vamos a la playa’ in Alicante.

Also, a few miles outside the city centre, in the resort suburb of San Juan, there is a seven-mile stretch of golden sand. San Juan now has its own five-star hotel, Hesperia Alicante Golf and Spa, complete with a Seve Ballesteros-designed golf course.

One of the drawbacks of Alicante used to be the lack of good hotels, but with the opening of the Amerigo property from boutique group Hospes in the old quarter, all that has changed. Now visitors can enjoy a five-star experience in the city, with the beach and marina just a five-minute walk away.

The Amerigo blends the old and the new perfectly. It is housed in a converted Dominican Convent, built in 1616, with some cutting-edge modern touches.

The hotel’s innovative Senzone Tapas Bar gives a modern twist with some mouth-watering tapas, while a few blocks away visitors can find the traditional variety at Restaurante Nou Manolín on Calle Villegas.

Art and culture are plentiful in Alicante. The 16th century Castillo de Santa Bárbara, which occupies the highest point in the city, not only has panoramic views of the city and the sea, but also a contemporary Spanish sculpture collection. For €1, a lift will take you down to the beach.

Dynamic package: Avro flights from Gatwick to Alicante start from £99. Rooms at the Amerigo start from £112.

Best for: fiesta lovers and yachties

Why: Valencia embodies the best of both worlds; a classic but manageable city not overrun with tourists and with a developing beach culture.

Unlike Alicante, the beach is not in the city centre, but a short taxi ride away. However, don’t let that put your clients off as there are great hotels in both the beach area and the historic old city centre. It also has a brand new marina.

Valencia hosts the world’s largest fireworks festival, Las Fallas, in March, when the city is literally set on fire. The grand finale is always on March 19, when vast papier mâché figures – or ninots – which have been erected by local Falla societies all over the city, are set alight.

Valencia has effortlessly blended modern architecture with its historic heritage and nowhere is that more obvious than the futuristic Cuidad De Las Artes y Las Ciencias (City of Arts and Sciences), which features an opera house, an IMAX cinema and planetarium, a science museum and a marine park. Located in the dry riverbed, the Hemisfèric, which has been likened to a beetle, is the visual highlight.

The Museo de Bellas Artes is one of Spain’s finest museums with works by El Greco, Goya, Ribera and Velásquez.

Sample package: Thomas Cook Signature offers three nights’ bed and breakfast at the four-star Melia Plaza in May, from £354 per person, including flights from Gatwick. (Tel: ?0870 443 4434, ?tcs4agents.com)

Why: Like Alicante, Malaga is often perceived as little more than a gateway airport. The typical port city, does, however, make a splendid cultural city break with some good beaches thrown in.

Malaga is blessed with leafy boulevards, gorgeous gardens, some impressive monuments and great museums. The best of these is the excellent Museo de Picasso, in the 16th century Placio de Buenavista in Malaga’s historic old quarter. The house in which Picasso was born is also open to the public.

The cathedral is definitely worth a visit and the impressive Castillo de Gibralfaro occupies a majestic hilltop location, with stunning views of the city and the Med below.

The most accessible beach, Playa de la Malagueta, which is lined with restaurants and bars, is a short walk from the city centre. Malaga also has one of the best Semana Santa (holy week) celebrations in Andalusia, and the nine-day Feria de Malaga in August is Andalusia’s biggest and most exuberant summer fair.

Sample package:Castaways offers three nights’ bed and breakfast at the Parador de Gibralfaro from £549 including flights and transfers. (Tel: ?01737 812 255)

Best for: art, art and more art – with food and drink

Why: The grim, decaying, industrial relic of the past has metamorphosed into a dynamic, hip, culturally zinging A-list destination in less than two decades.

Much of the credit must go to Frank Gehry’s architectural masterpiece, the Guggenheim Bilbao. The collections inside represent the very best of modern and avant-garde artists.

Just down the road is the Museo de Bellas Artes, which contains works by Goya, El Greco, Zubaran, Van Dyke and Gauguin.

There are some good beaches a short metro ride away, including Las Arenas (for sunbathing) and Ereaga (for surfers). Head for the Casco Viejo, Bilbao’s old town, for some serious eating and drinking.

Sample package: Kirker Holidays offer three nights’ bed and breakfast at the four-star Indautxu from £496 in May, including flights, transfers and entry to the Guggenheim. (Tel: ?020 7593 1899)

Best for: style, culture and nightlife

Why: Barcelona is one of the world’s great cities: stylish and chic with fabulous architecture, superb cuisine, cutting-edge bars and clubs, museums and a beach.

After visiting the Sagrada Familia or one of Gaudi’s other famously eccentric buildings, visitors can wander through the winding streets of the Barri Gòtic, or stop for a pintxo (a snack where ingredients are pinned to bread by a cocktail stick) and a beer.

A visit to the central market gives a fascinating insight into Spanish food, and if clients want to splash out afterwards there are 14 Michelin-starred restaurants to choose from.

The beach is not as central or as good as Alicante’s, but it’s a welcome respite from the city’s intensity – and a good place to recover the morning after the night before, when Barcelona’s ultra-trendy club scene may well have incited visitors to have one too many.

Sample package: Kirker Holidays offers three nights’ bed and breakfast at the five-star Hotel Arts (located by the beach) from £953, including return flights on British Airways and transfers. (Tel: ?020 7593 1899?)