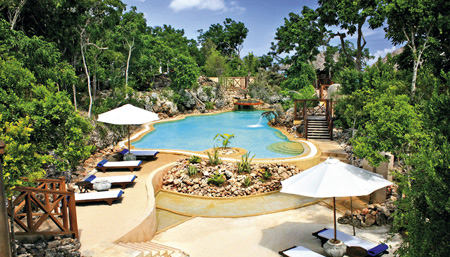 The all-inclusive holiday concept may have started in the Caribbean, but it’s now on offer around the globe – and all-inclusive resorts are the best-performing holiday choice for this year.

Olympic Holidays commercial director Photis Lambrianides said: “The all-inclusive concept is available everywhere and at all price levels, with some excellent properties to be found in Egypt and Turkey.

“We place great emphasis on the all-inclusive product and with sales up year on year, we are looking to expand it further across our brochure range.”

Hayes and Jarvis and Thomson Worldwide have brought out dedicated all-inclusive brochures for the first time for 2009.

Head of commercial Niel Alobaid said the operator is looking beyond the traditional Caribbean region. He explained: “Although the Caribbean still accounts for nearly one third of the all-inclusive packages booked through Hayes and Jarvis, the biggest proportional growth in business for the year to date has come from the Indian Ocean, where the Maldives, Mauritius and Sri Lanka now contribute over 40% of all-inclusive bookings.”

Travel Weekly looks at what’s new in the world of all inclusives, and picks out some special offers.

Hayes and Jarvis has introduced Rex Resorts, Beaches and Almond Resorts among others in its All Inclusive Collection, which runs from May 2009 to September 2010. Meanwhile Thomson Worldwide has added the five-star Paradisus Princesa Del Mar in Cuba in its first all-inclusive brochure, just released.

Jumby Bay, A Rosewood Resort, will open in Antigua in November, following a £15 million refurbishment that will add a spa, oceanfront infinity pool and renovated open-air restaurant. ITC Classics has seven nights at £2,286 per person. (01244 355 527; agents.itcclassics.co.uk)

Curtain Bluff in Antigua has frozen 2009 prices and has some special offers from April to June, including five nights for the price of four in a junior suite and 25% discount off a second room for families. The property’s new spa is now fully operational.

Sandals’ Beaches Turks and Caicos opened its Italian Village in January, adding 162 two-bedroom family suites to the existing 453 rooms at the resort. In addition, Pirate’s Island Waterpark at the resort has been expanded with seven new slides.

The Gran Bahia Principe Jamaica, in Runaway Bay, has added a Marine Spa. Hotels4U.com has rooms starting from £63.50 per person, per night for June 2009.

Rex Resorts is celebrating the golden anniversary of its Hawksbill property, Antigua, with complimentary sparkling wine and a spa treatment. Kuoni has seven nights at £919 per person. (01306 747008)

A deluxe all-inclusive, the Lily Beach Resort and Spa, opened in the Maldives in April, on Huvahendoo. The resort has 119 villas and a Tamara Spa. Kuoni is featuring the property and has seven nights from £2,100 per person in a beach villa. (01306 747008)

Thomson Worldwide has introduced the four-star Melia Benoa, near Nusa Dua, Bali, in its new All Inclusive brochure. Prices start at £1,289 per person for seven nights. (0871 664 0273; thomsonworldwide.com/agents)

On Mauritius, the five-star Les Pavillons, run by Naiade Resorts, has reopened following a £21 million refurbishment including a new spa, Nymphea, with eight treatment villas, hydrotherapy suite and infinity pool.

Hayes and Jarvis has included four and five-star all-inclusive packages in Mauritius, in its new all-inclusive brochure, and expects the options to be popular among honeymooners. Resorts include Paradise Cove, Tamassa and Le Meridien Ile Maurice. Exclusive properties in Bali, Krabi in Thailand and Zanzibar have also been added to the programme.

Libra Holidays has added more all-inclusive properties in Greece, bringing the choice to more than 30 three to five-star hotels in Crete, Rhodes, Corfu, Zante and Kos. (0871 222 8181)

Crete is firmly establishing itself as an upmarket all-inclusive destination and Classic Collection has added the island’s Aldemar Knossos Royal Village to its 2009 programme. Other operators that feature the Aldemar, ideal for couples and honeymooners, are First Choice, Olympic Holidays, Cyplon and Planet Holidays. Daily easyJet flights to Heraklion make it possible for agents to package this hotel themselves.

Oympic Holidays has added two four-star properties in Crete for this summer – the four-star Nana Beach Hotel in Hersonissos and Sissi Bay Hotel at Sissi Bay.

Htels4U.com has added the three-star Mare Monte Resort, Agios Ioannis, Corfu, for summer 2009. Situated between the coast and mountains, the complex is an ideal base to explore the island. Prices start at £22.80 per person, per night.

I Turkey, Olympic Holidays has added two four-star all-inclusives, the Yasmin Resort and L’Ambiance Resort, both on the Bodrum Peninsula.

Turkey specialist Wings Abroad will introduce all-inclusive short breaks in Antalya in its winter 2009 programme. All stays will include free golf at local courses. (0845 408 2681; wingsabroad.co.uk/agentsdesc.aspx)

Hotel choices will include five star properties Titanic Beach Resort in Antalya and Belconti Resort Hotel in Belek, with prices starting at £399 per person for three nights.

Olympic Holidays is offering 14 nights at the five-star Marmaris Palace in Marmaris, Turkey, for £760 per person in June. (0844 499 4449; olympicholidays.com/agents/signon.asp)

Other short and medium-haul destinations

Discover Egypt has launched its first all-inclusive Nile cruise on board Viking III, featured in the operator’s new brochure, which runs from May 2009 to October 2010.

The seven-night break is offered year-round, with flights from Gatwick or Manchester. Special offer prices of £599 are available from mid-May to mid-June, a saving of £50 on the brochure price. This includes 10 excursions with an Egyptologist. Single person supplements have been halved for the offer period, to £125. (0207 407 2111)

Hotels4U.com has introduced the family-friendly, four-star Caribbean World Mahdia, Tunisia, from £20.54 per person, per night and the five-star Sentido Oriental Dream, El Qusier, Egypt. The latter is set on its own private beach, and costs from £31.71 per person, per night. Prices are for June departures.

In Dubai, Virgin Holidays has added the five-star Hilton Ras Al Khaimah Resort and Spa, with prices from £679 for a week’s stay in June.

Olympic Holidays has added all-inclusives in Croatia, Montenegro and Malta, to suit all budgets, with new properties in its Summer Sun, upmarket Gold Collection and budget Smart Choice programmes. The Valamar Club Dubrovnik and Iberostar Epidaurus Hotel in Cavtat are three-star additions in Croatia. In Montenegro, the four-star Iberostar Bellevue near Budva has been added, while in Malta, the five-star Fortina Spa Resort and four-star Fortina Hotel in Sliema are new.

Crystal Lakes has seven nights at the family-friendly Hotel Leonardo da Vinci, Limone on Lake Garda, Italy, for £495 per person. The price includes a lake tour and, for bookings between July 11 and August 21, tickets to Caneyworld Water Park and Movieland Theme Park. (0871 230 8180)

Thomson Lakes has one week at the four-star eco-friendly Family Resort Werfenweng, near Salzburg, in the Austrian mountains from £2,144 in August. (0871 230 8181)