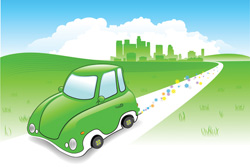 Do we fly away on holiday because it is the only way to go or because it is cheaper and more convenient? If it is the latter, could we be convinced to make shorter overseas journeys by rail, road and sea?

Sustainable development charity Forum for the Future believes we can and, with funding from The Co-operative Travel Group, has produced Overland Heaven, a study of alternatives to flying.

Its report asks why 77% of trips from the UK to Europe are by air when so much of the continent is within reach of high-speed trains.

“Flying is the norm,” it argues. “Yet with the extra hours required for check-in, security and ­transit even a two-hour flight can take most of a day.

“Overland travel is a different experience from flying, but can become a positive part of a holiday rather than just a period of limbo. Rail travel can reduce the climate footprint of a journey by up to 95% compared with flying.”

Time: Train travel is almost as quick as flying for closer destinations such as Amsterdam and Geneva. Travelling further takes longer, but this might not matter if the journey is seen as part of the experience or used to get a night’s sleep.

Cost: Rail travel tends to be more expensive than flying, although the need for extra accommodation after a flight may cancel this. Bus travel is generally cheapest.

Hassle: Airports and flight transfers can be stressful, but so can changing trains. Booking overland travel can be a headache compared with buying a flight.

So what is hindering overland travel? Consumers expect it to be slow and expensive, a fragmented booking system makes it harder to book, there are too many areas where things can go wrong and too few incentives.

On cost, the report argues: “Some budget flights are cheaper than a taxi to the airport, but the unseen costs go far beyond the add-ons and surcharges.

“Booking flights is easy, whereas rail tickets are expensive and complicated to buy, restrictions abound, and lack of co-operation between operators means connections can be a ­challenge.”

Then there is the problem of perception: “Trains, coaches and ferries are associated with school trips and pensioners more than the modern traveller.”

Co-author and Forum for the Future principal ­sustainability adviser Rupert Fausset insists the aim of the project is not to end holiday flights.

“No one in their wildest dreams expects to vanquish air travel,” he said. “The idea is to provide a clear option that is low carbon, but enjoyable and reliable.”

The results of a YouGov poll commissioned for the study, on what factors would most encourage people to choose an overland option to Europe, suggest there could be
an audience for this.

Of almost 2,200 respondents, 54% said they would consider overland travel if it did not cost more than flying, 50% if it did not take much longer and 43% if the journey was more comfortable.

Cost was the major concern among young people, comfort was second to cost for over-55s, and the time taken to travel was the top concern among those in the north.

The survey found 15% could be persuaded to travel overland if it was easier to book. However, only 13% would consider it on environmental grounds – emphasising the need to deal with issues of cost and convenience.

The study examined five specimen trips to Europe, comparing the journeys by rail, road and air, and concluding many overland journeys can compete with flying on time, cost and hassle.

Then it considered what might be required to improve matters. For example, overland travel is seen as budget – so rebrand it as luxury, productive and fun.

Flying is viewed as better value for money so make overland travel the same or better value and emphasise the lack of add-ons, such as baggage charges, ­compared with flying.

Overland is perceived as slower so highlight the door-to-door time of journeys. Overland is harder to book so develop automated booking and display overland options alongside flights.

There is a lack of ­flexibility so develop overland travel passes and integrated ­ticketing similar to the Oyster card in London, but for international use.

Fausset does not expect interest from every holidaymaker. “Talking about making the journey part of the experience will work better for some than others,” he said.

“The summer-sun holiday is not our top target. But for journeys of 1,000-1,500km the difference in time between air and overland can be small. Also, it may take two hours to reach somewhere by air, then the first thing people do is flop into bed so the holiday does not start until the next day. A sleeper train would deliver the same thing.”

Fausset accepts there are major challenges, and said: “We do not believe any one organisation can make it happen. It requires a group of organisations including those that bring the lessons of the flight-based sector. We aim to get a range of organisations together – tour operators, transport providers, data providers.”

The Co-operative Travel Group is already on board. Fausset said Eurostar is keen and the European Commission supportive. “Some barriers need policy action so we need government involvement,” he said.

Now Forum for the Future is poised to approach major industry players such as TUI Travel and Amadeus to join the next phase of the project, an Overland Partnership.

It suggests the goals of that partnership should include an initiative to develop integrated booking systems, the marketing of overland travel, a customer-reward structure and a strategy to win support from governments and other service providers. It hopes to start work in July.