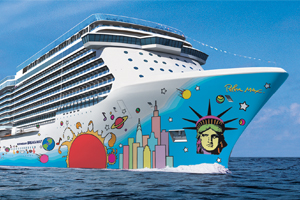 Norwegian Sun and Norwegian Star, both built in 2001, have also both been revamped.

Replacing Fat Cats Jazz & Blues Club, Syd Norman’s is a tribute to the grandfather of ‘Rock of Ages’ playwright Chris D’Arenso and modelled after influential rock venues such as CBGB’s, The Rainbow and the Fillmore.

Additional upgrades include enhancements to Bliss Ultra Lounge with new furniture; new carpets in all 2,014 cabins and suites; a transformed gift shop and new carpeting in staircases, elevators and lobbies.

All 968 cabins together with public spaces have been refreshed on Norwegian Sun, with three new venues added – Los Lobos Cantina, Bliss Ultra Lounge and Spinnaker Lounge – during a three-week renovation in Canada.

Sky High Bar, Bliss Ultra Lounge and Spice H2O have been added to Norwegian Star during a three-week dry dock in Barcelona.

All 1,174 cabins and suites were fitted with USB ports, enhanced with more than 1,500 works of art and upgraded with new carpet, headboards and furniture.

The ship’s three-bedroom garden villas, which feature private deck areas and accommodate up to seven people, were also remodelled.

NCL president and CEO Andy Stuart said: “What a year this has been for us. Not only did we introduce our latest and record-breaking ship, Norwegian Bliss, and announce the redeployment of her sister ship Norwegian Joy, but we are now unveiling our newly revitalised ships, Norwegian Breakaway, Sun and Star.

“This is a testament to how invested we are in our guests’ experience.”