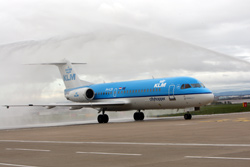 If you’ve noticed that the queues for the arduous security check at UK airports are a little shorter, you would not be wrong.

Despite a recent resurgence in business travel and Easter falling late in the year, passenger numbers, according to the British Airport Authority (BAA), are declining at nearly 7%, year-on-year.

Even regional airports, which have expanded over the past decade, are suffering a drop in traffic for the first time in 18 years. This comes as besieged airlines slash less lucrative routes, while demand for weekend breaks in continental Europe falls.

The lack of queues might also be because you can pay £3 at Luton, which has become the latest airport to open a priority lane for passengers wanting to fast-track security, outraging some travellers. This comes after the airport started charging £1 to use its refurbished drop-off zone.

These announcements have sparked fears that similar schemes could be introduced in other airports. Generating every scrap of revenue is the name of the game now that BAA has said that the “outlook remains challenging” for its airports.

However, there are bright spots for air travel from the UK, whether it is new routes, new airport hotels or the latest services, and agents should be focusing on these now the economic downturn is in full swing.

For instance, KLM recently launched a service from Liverpool John Lennon airport to Amsterdam. Network senior vice president Pieter Elbers said: “By adding Liverpool to our network, KLM has strengthened its position in the UK market.”

Liverpool is putting pressure on airlines to re-establish a link with Heathrow after the airport’s daily service to London City was axed by VLM last year. Other regional airports are also doing the same, hoping to claw back services in the wake of BMI cutting three daily flights to Durham Tees Valley and its 40-year links from Leeds Bradford.

Yet bmi is boosting its route portfolio where it is likely to make money – increasing its Birmingham to Aberdeen flights to three a day, a five-times-a-week service to Kiev and doubling its flights to Riyadh, as well as launching a second daily service to Tel Aviv from Heathrow. El Al is also boosting its Luton service to the Israeli city with a third daily flight.

Aer Lingus has been shaking up the low-cost air scene at Gatwick, going head-to-head with easyJet with recent launches to Dublin, Knock, Munich, Zurich, Faro, Nice, Vienna and Malaga. It is also promising new destinations after claiming it has sold 250,000 seats since tickets went on sale earlier this year.

Air Europa has launched a Madrid route, with two flights a day from Gatwick – morning and afternoon – with fares starting at £28, one way. And budget spin-off Bmibaby has named Teeside airport as its fourth base after launching its third out of Manchester in May.

Airport hotels not down or out

Bookings at airport hotels are down massively because of the fall in passenger numbers, and a study by Deloittes said that a surge in new hotel supply and the rise of budget hotels is also to blame.

Holiday Extras has a good insight into this sector as it books about 50,000 rooms at airport hotels every month. Head of sales David Stratton said: “While it’s true that increased choice is driving prices down, we don’t agree with the implication that this is necessarily a bad thing. Healthy competition between hotels is what secures the best deals for travellers and provides a good opportunity for agents.”

BAA is investing £7.2 million resurfacing the main runway. The short-stay car park will also get a new deck, costing £5 million. Also, a major refurbishment of the catering facilities at the Dyce terminal is under way, with a new food partner at the airport, TRG.

Airport managing director Kevin Brown said: “We will be celebrate our 75th birthday this summer, and it is fitting that we are announcing significant investments at this time.”

Clients lucky enough to be travelling on a BMI flexible business-class fare to Cairo, Tel Aviv or Beirut can now use its chauffeur-drive service. When clients arrive at the terminal, they are met by a bmi concierge, who will collect their bags and transfer them to a new premium check-in zone at Terminal 1. The service is available on eight routes.

In the past few months, the Highways Agency has been showcasing its revamped website providing live traffic data and views from motorway CCTV cameras for those wanting to avoid congestion on the way to the airport.

Travellers can access the site from a mobile phone and agents can use the service to inform business clients when there are problems on the roads – when access to the airport is crucial.

Following the economic storm engulfing Reykjavik last year, Icelandair suspended its Glasgow flights. But the airline, which has served Scotland for more than 60 years, is making a comeback. Twice-weekly flights to the capital will resume on August 2, with departures every Thursday and Sunday until November 8.