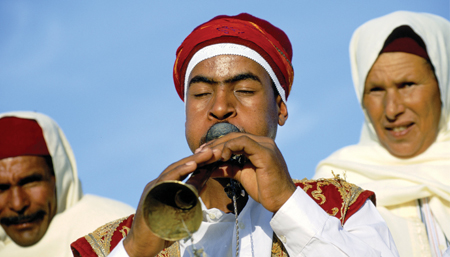 There’s no better way for clients to experience North Africa’s vibrant atmosphere than by joining in with a festival.

Whether your customers are film buffs, jazz fiends, yoga experts or, erm, fond of camels, there’s an occasion in North Africa to suit them. It’s easy to tailor a package or suggest dates that will allow them to see a small slice of traditional life alongside classic sightseeing activities or beach time.

They may forget among all the fun, so it’s worth reminding them to be extra vigilant with handbags and valuables when they’re surrounded by large crowds. As they’ll be surrounded by locals, it’s also wise to mention the need to dress appropriately; they’ll feel more comfortable if they cover up a bit and leave the beachwear for the beach.

The calm white medina of coastal Essaouira comes alive twice a year with music and dancing. In June, the Gnaoua and World Music Festival welcomes half a million visitors to the town, who come to see traditional Gnaoua (a combination of Berber and Arabic songs and rhythms), and internationally acclaimed world and jazz performers.

In November, the Andalusian and Atlantic Music Festival incorporates music from southern Spain and Latin America as well as Morocco itself.

Those with a taste for North African cuisine won’t be disappointed here; they can spend all day snacking at special tastings, attending classes, watching demonstrations, discovering local ingredients, and most importantly, feasting their fill on tagines, kebabs, harira and all sorts of meze. Fantasticmorocco.com has a review of the 2008 festival.

Snake-charmers, henna-tattoo artists and stall owners alike vacate the bustling Djemaa el-Fna, Marrakesh’s main square, for this annual film festival. Movies from all over the world are screened in this huge open-air cinema, and visitors may even spot a celluloid legend – previous visitors include Susan Sarandon, Martin Scorsese and David Lynch.

The summer months see a rash of music and cultural festivals all over Tunisia, which make the most of the country’s historic sights.

The French-influenced city of Bizerte in the north hosts a festival that showcases its indigenous talents, from music to food to local crafts.

Visitors to Tunis during the month of Ramadan get the chance to see an entirely different side of the city’s exquisite medina from the typical tourist stalls.

They can go inside the Tunis Theatre, or into beautifully decorated palaces and gardens, and listen to classical Arabic or world music, see films by Arab and French directors, or see strange spectacles such as medieval jugglers or whirling dervishes.

Festival of the Sahara, Douz – November

Celebrating the traditions of the Berber desert people, this is the place to come to see horse races and camel fights, sand hockey and belly dancing, and to hear the music and poetry of the desert. Douz is the largest of of Tunisia’s desert oases, but palm trees still outnumber people, so clients will get a true feel of the Sahara.

Visitors can enhance the iconic ancient sights of Luxor by visiting during this two-day celebration of the city’s patron sheikh, when there are horse races, music dance and traditional tahtib stick fighting, before a parade of floats through the streets.

The theme of this year’s Egyptology and cultural arts festival is the elements. Water, fire, earth and air will be celebrated with traditional dance, music and cosmology, and hardcore pharaoh-philes can attend workshops and seminars.

The less focused can enjoy the entertainment in the shadow of the lone surviving ancient wonder of the world.

The Pyramids at Giza are just the starting point for this celebration of everything yogic. After three days doing downward dogs in Egypt, participants move on to Jordan’s Rift Valley and then to Petra. Even the most inflexible client can take comfort in the stupendous views, meditate, or learn about astrology or karma.

Young girls dance in costume at the Imilchil Marriage Festival in the Atlas Mountains from August 25-27.

In October, Fez hosts the Horse Festival, where equestrians show off their skills.

There are jazz festivals in Tangiers and Rabat in June and in Fez in November.

The northern town of Tabarka hosts a jazz and world music festival in July, and the Coralis Diving Festival in September.

At sunrise on a certain day in February and October each year, crowds gather at the temple at Abu Simbel to watch shafts of light creeping across the stone to illuminate statues of the gods.

There will be a lot of dromedaries in Sharm el-Sheikh in May, with 17 different tribes convening for the South Sinai Camel Festival.

Classic Collection Holidays offers seven nights at the five-star Riu Palace Oceana in Hammamet Yasmine from £799 per person in 2010 including flights, private transfers and bed-and-breakfast accommodation in a junior suite with garden view. 0800 008 7288, classic-collection.co.uk

Kuoni offers four nights at four-star Le Méridien Pyramids Cairo in a standard room with breakfast, including flights with British Airways from Heathrow and in-resort transfers. The price is valid for December 2009 from £506 per person twin-share. 01306 747 008, kuoni.co.uk