Real-life whales are famous for travelling great distances, but a giant plastic whale? It sounds unlikely to move at all. Yet one night last year, the colourful aquatic centrepiece at all-inclusive Iberostar Bella Vista Varadero on Cuba’s stunning north coast was blown right out of the swimming pool and all the way across the luxury resort.

The night in question was, of course, when Hurricane Irma struck in early September 2017. The first category-five hurricane to hit Cuba in 80 years created winds of up to 125mph, caused millions of pounds in damage and affected tens of thousands of homes and buildings.

However, just one year on and you would be hard pushed to find any signs that such devastation was wreaked upon the resorts that line Cuba’s famous beaches.

“The main resort areas are still relatively undeveloped and there isn’t a great deal in the way of outside entertainment or independent restaurants.”

While every hotel has its own tales of destruction – broken windows, flooded floors and hundreds of trees swept away by the force of the hurricane – they also have stories of the inspiring aftermath, as workers came from all over Cuba to repair the damage. The hardest-hit hotels, along Cuba’s north coast from Varadero to Cayo Santa Maria and Cayo Coco, were shut for two months but still managed to emerge, refurbished and reopened, for the start of the season.

The replanted trees will take a while to reach the height of their predecessors, but Cuba’s golden beaches are world renowned and the resorts that line them are very much open for business.

While most of the hotels are all-inclusive – the main resort areas are still relatively undeveloped and there isn’t a great deal in the way of outside entertainment or independent restaurants – the hotels themselves are keen to provide a distinctly Cuban vibe, with everything from food and drink to evening entertainment served up with local flair. 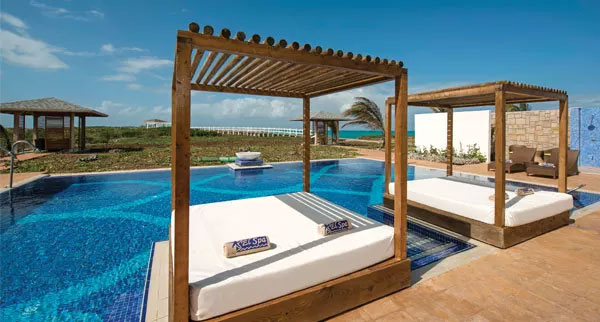 From the panoramic terrace at the top of the aptly named Iberostar Bella Vista Varadero, it is possible to see all the way along the Hicacos Peninsula, where Varadero is located. The wafer-thin spit of land jutting out into the Atlantic Ocean boasts 12 miles of sandy beaches and is one of Cuba’s tourism hotspots.

The top-floor terrace at the Bella Vista, which has an open-air bar as well as a more formal restaurant inside, is the highest viewpoint on the entire peninsula and perfect for sundowner cocktails and spectacular sunsets.

The hotel has 827 rooms ranging from doubles to family rooms, suites and VIP-only areas, and guests can choose between four swimming pools, six bars and four à la carte restaurants. All-inclusive rates start at €153 per night, for two people.

“By day, guests sunbathe on the beach, while at night, they’ll be found dining at one of five restaurants, or in the audience of nightly shows.”

Just along the coast from Bella Vista is the 386-room Iberostar Varadero, which has a stunning central lobby leading on to the main pool, which hosts a weekly foam party. By day, guests sunbathe on the beach, while at night, they’ll be found dining at one of five restaurants, or in the audience of nightly shows that range from West End musicals to displays of Cuban dancing.

Entertainment isn’t confined to the grand stage though: at El Bosque restaurant, the ‘waiters’ transform into aria-singing opera stars while you dine on octopus carpaccio and filet mignon from its six-course gourmet tasting menu. All-inclusive rates start at €220 per night, for two people. 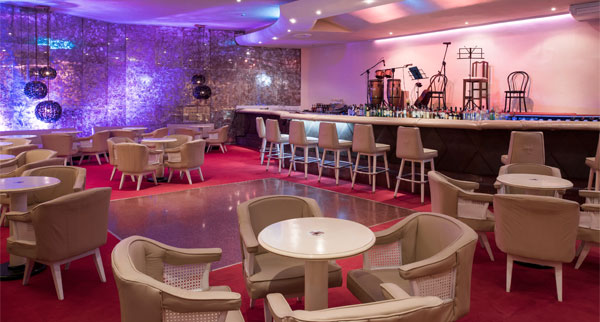 There is a refined and exclusive air to Iberostar Ensenachos, which sets it apart from the area’s other resorts and gives a real feeling of luxury. Overlooking two white-sand beaches – Megano and Ensenachos – the 500-room complex is on a cayo of its own, next to the larger Cayo Santa Maria.

“There is a swimming pool, as well as access to the Instagram-worthy beach, and lunch can be taken at the beach cafe.”

For those seeking the A-list experience, Ensenachos Grand Village is separate from the main resort – a buggy will whisk you along its tree-lined avenues – and boasts 46 suites complete with butler service, VIP check-in, lounge and whirlpool tub on your own private terrace. There is a swimming pool, as well as access to the Instagram-worthy beach, and lunch can be taken at the beach cafe, which does a great chicken chimichurri plus the local staple of rice and black beans.

The Grand Village has a formal bar and restaurant, El Colonial, where diners enjoy lobster thermidor to live musical accompaniment. All-inclusive rates start at €142 per night, for two people.

Like Varadero, Cayo Coco is one of Cuba’s most popular resort regions – and it’s not hard to see why. With white-sand beaches, coral reefs and rich lagoons housing flocks of bright-pink flamingos, Cayo Coco is rich in colour, life and atmosphere.

At the 482-room Iberostar Playa Pilar, diners at the Japanese restaurant are treated to an evening of culinary theatrics as food is prepared tableside, the chef flourishing his knives and flicking morsels directly into hungry mouths, while at the neighbouring Iberostar Daiquiri, guests can make rum cocktails from fresh sugar cane, or sip seriously strong margaritas at the Mexican restaurant. All-inclusive rates start at €153 or €103 per night, respectively, for two.

During the day, Playa Pilar guests can join in competitions by the pool or relax in its luxury spa and beauty salon, before gearing up for the night’s entertainment, with a nightclub that’s open until the early hours. 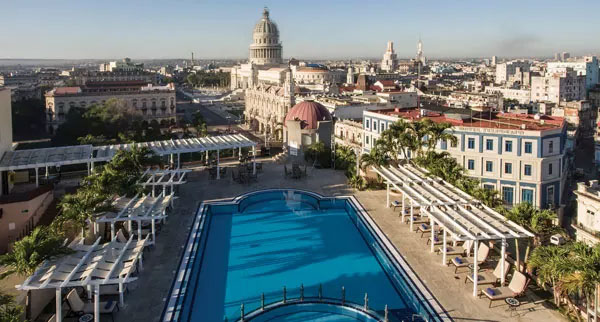 A landmark site in a city full of landmarks, the Iberostar Parque Central is just 100 metres from the newly renovated National Capital Building and right in the centre of Old Havana. It’s a modern hotel in a colonial-style building, which feels luxurious from its vast lobby (live music entertains guests from morning coffee to pre-dinner cocktails) to its rooftop bar and swimming pool, with spectacular city views. Bed-and-breakfast rates start at €202 per night, for two people.

Parked right outside the hotel are the fabulously colourful vintage American cars for which Havana is famous – you’ll travel in style whether you’re in a pink Cadillac or a scarlet Chevrolet – but if you prefer to go on foot, you are just minutes from Havana’s historic heart and many of Ernest Hemingway’s old haunts.

“It’s a modern hotel in a colonial-style building, which feels luxurious from its vast lobby to its rooftop bar.”

Proof that hotels are icons in their own right here comes in the shape of the Habana Riviera by Iberostar, an art-deco hotel that has been declared a national monument. Opened in 1957 as a casino hotel to rival those in Las Vegas, the 352-room Habana Riviera is a living homage to the era of cocktails, cabarets and cool living, featuring an outdoor seawater pool, vast lobby overlooking the Malecon esplanade, and fine-dining Primavera restaurant. Bed-and-breakfast rates start at €132 per night, for two people.
iberostar.com/en

Three of the best Havana highlights

Hemingway’s haunts
From Bar Floridita to Hotel Ambos Mundos, where Hemingway lived for years, Havana is full of the author’s former drinking spots.

Old Havana
The old town reveals the many influences that have shaped the city’s character, from its Spanish colonial roots to the present day.

Cruising around in a Chevy
Cuba’s beautiful vintage cars are a treat, so jump in, put the top down and tour the sights.