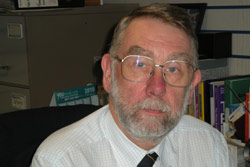 Running the only high-street agency on the Shetland Isles, born-and-bred Shetlander Peter Leask is used to the remoteness of his business and its accompanying advantages and disadvantages.

On the plus side, about 23,000 people live on an island that is up to 14 hours away from the mainland by ferry, and 50 minutes by air to Aberdeen.

This makes many of the islanders inveterate travellers, and while some are turning to the internet to make their arrangements, many still visit John Leask and Sons for a quote.

He said: “We’re in a different situation from most agencies, as a high percentage of what we do is domestic air travel because we’re on an island.

“About a third of our turnover is made up of selling domestic air travel, and while the bulk of it is to Scottish airports, it can be to anywhere.”

After a period of high unemployment in the 1950s and 1960s, many Shetlanders moved away, fuelling travel to and from the island for friends and family visits.

However, while guaranteeing unique access to a regular travelling clientele, the Shetland Isles’ remoteness also brings its own set of problems.

Leask said: “The distance we are from other agents is a disadvantage. We can’t pop out to lunches when an operator presents its latest offerings. For any other agent it means a couple of hours out of their day, but for us, it would take two days out of our week.”

The business dates back to 1919, when it offered transport for inbound visitors to the Shetland Isles. It only became a travel agency in the mid-1930s, when flights connecting the island with the mainland became available.

Leask joined in 1972 and is the third generation of the family to run the business. As a partner, he continues to act as a ground handler for inbound tourists, as well as supplying coach and bus transfers, which accounts for a third of the business.

While flights between the island and Scottish airports may be costly, Shetlanders are able to offset it with a 40% reduction, thanks to the Scottish government’s air discount scheme. Leask believes this will help local customers continue to travel through the recession, although he has seen a dramatic impact on inbound tourism.

“The problem this year – on inbound travel – is Shetland is not a cheap destination to get to, and the report that Brits will holiday at home this year probably doesn’t apply to us. People in the south can probably go halfway across Europe for the cost of coming here.”

The business employs 40 staff and is a member of Global Travel Group’s Independent Options.