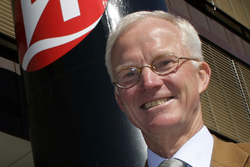 Hurtigruten chief executive Olav Fjell has called 2009 a year of transformation for the niche Norwegian cruiseline.

A restructure is under way: earlier this year sales and marketing activity was consolidated; Germany now has responsibility for continental Europe, and the UK has the US, UK, and the rest of the world.

For Fjell, who has been with the company less than two years, internal consolidation was an obvious move. “It didn’t take a genius to see there was potential for us to be more efficient by restructuring.”

The company is also halving its Norwegian shore staff, with the loss of about 200 jobs.

The fact Hurtigruten is a niche cruiseline has been its saving grace during the recession, according to Fjell.

During the first quarter of the company’s financial year, sales volumes were just 4% down on last year.

“Hurtigruten hasn’t been as badly hit this year,” said Fjell. “Prices are holding up well. One reason is we are selling an experience of the destination.”

The UK could overtake Germany as its largest source market for sales in the coming years, according to Fjell.

Germany is the group’s largest sales division but the UK has been earmarked for significant growth. “I see huge potential with the UK market. We have a product that appeals to the Brits,” Fjell said.

Boosting the UK’s market share to become its biggest source market was “realistic”, he said, considering the growth of ex-UK cruise sales.

UK trade sales were already “moving in the right direction” for the brand, which aims to increase its share of agent bookings from 55% to 85% of business in three years.

Meanwhile, Fjell maintained the shift to late bookings in the UK had been less of an issue because Hurtigruten was less reliant than traditional cruiselines on the early-booking market. “Our focus is on the summer,” he said.

He admitted there was still capacity for the second half of the summer, but said the UK had started to claw back lost bookings. “In the first quarter [of the financial year], the UK was down in sales volumes, but it has returned,” Fjell said.

One of Hurtigruten’s biggest challenges remains filling ships during the winter season, said Fjell. “Hurtigruten has traditionally had three months in the summer when ships were full and the rest of the year they are running almost empty.”

But sales were improving as a result of a focus on the benefits of travelling to Norway during winter, such as the Northern Lights, he said.

“We’ve had growth in the winter for several years, but there is a lot to be done. It’s low occupancy in the winter, and it will be a focus for us in the future,” he said.

Fjell added the cruiseline was unlikely to expand beyond its core destinations, which include the Norwegian coastline and Spitzbergen. “We are trying to focus on what we know best. The Baltics and Mediterranean cruises we offer are more a function of us repositioning ships from the north to the south – that’s not where we see our future focus.”