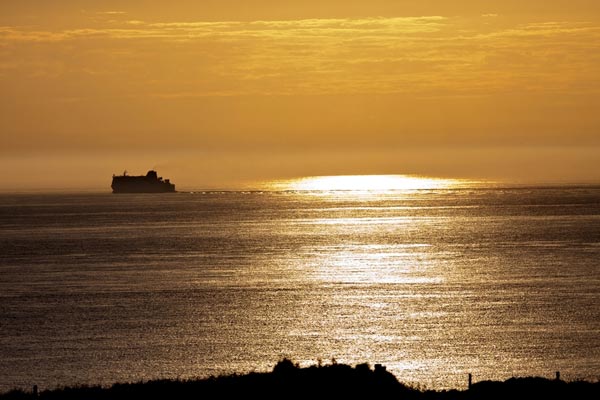 The master and mate of a car ferry that struck yachts and ran aground off the Isle of Wight have been suspended.

The Red Falcon ran aground in fog off East Cowes on Sunday morning, weeks after another vessel operated by Red Funnel tore yachts from their moorings.

Red Funnel said the suspensions were “standard industry practise” and it was changing its procedures on operating in restricted visibility.

The owner of a yacht which sank said he has been contacted by the ferry firm.

The incident follows a catamaran and a channel marker post were struck by sister ship Red Eagle and two yachts were later found drifting early on September 27.

The two incidents are understood to involve different ships’ masters, the BBC reported.

Red Funnel CEO Fran Collins said she was “concerned” about the two incidents.

“It’s too early to speculate about the similarities, if any, with the last incident, but they both happened in restricted visibility so we’re making immediate changes to our operating procedures to prevent any reoccurrence,” she said.

“They are around how we look at what the visibility conditions are like… we’re looking at putting tighter limits on that and slight changes for how the bridge teams operate.”

She insisted the craft were “fully manned and in full compliance with all the regulations”.

The vessel “came into contact” with a number of boats while trying to berth at Cowes Harbour, according to the ferry operator.

None of the 40 passengers on board the Red Falcon were hurt in the incident on Sunday morning.

The ferry, which left Southampton for East Cowes at 7am on Sunday, got into difficulty an hour later while entering the harbour in low visibility.

The vessel came to a halt about 165ft off the esplanade.

The ferry was then refloated with the assistance of tugs.

It was cleared to be relocated to Southampton after coastguard surveyors completed an initial assessment.

Coastguards at the scene confirmed a mast seen in the water belonged to a vessel that sank in collision with the Red Falcon.

Collins said: “I would like to apologise to all passengers who have been disrupted by this incident, and emphasise that we give the safety of our passengers and crew the highest priority.”

All passengers and vehicles were discharged at East Cowes.