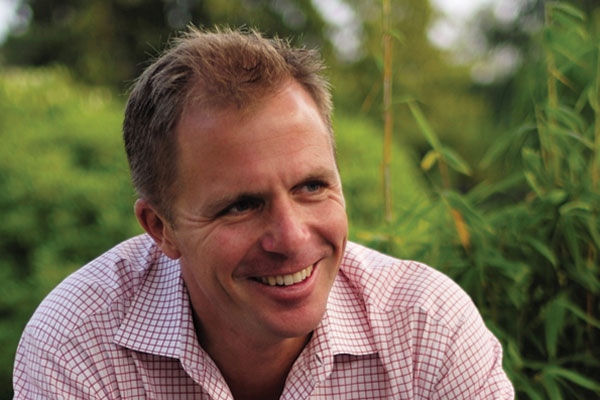 The new chief executive of the European holiday rentals and parks business that was sold by Wyndham earlier this year, arranged our meeting at a major London train station.

Henrik Kjellberg was about to embark on his first visit to Earby in Lancashire, where two of the brands now under his remit – James Villas and Cottages.com – are based.

An anglicised Swede – Kjellberg was Expedia’s 14th employee in London where he spent 12 years – he says he’s “super-excited” about the prospects for the €700 million turnover business.

“I kissed a lot of frogs when I was looking at what to do next, after Expedia” says Kjellberg whose most recent roles at the OTA were with its eLong joint venture in Beijing and Hotwire brand in the US.

“Travel is just such a great industry,” he says, “because it’s one of those industries that is so easy to be proud of.

“It’s great for forging friendships across nations and making the world that little bit smaller.

“People love dreaming about and talking about travel. It’s a phenomenal industry – that’s why I’ve committed 18 years of my life to it.”

As we spoke about how the business is today and his plans for the future, it became clear it is still early days for Kjellberg, who began his role in September.

The Hoseasons parent inherited the name European Vacation Rentals, following its sale by global hospitality giant Wyndham to investor Platinum Equity for $1.3 billion in May.

Kjellberg says one of his first jobs is to find a corporate identity that better reflects the business. “We are actively looking for a new group name,” he said.

Although he refers to ‘we’, Kjellberg reveals he is currently on his own in the corporate leadership team and looking for a chief financial officer and a technology director.

“I’m actively hiring,” he says. “The corporate office will be based in London, but I am looking to keep it fairly thin at the corporate level.

“It has been like coming into a start-up, but with established consumer brands and a scale that means you can really make a difference, which is what I like.

“As with all private equity firms, Platinum thinks there is a value-earning opportunity here, and most of that revolves around growth – more properties, more parks, better product.

“Platinum clearly understands the complexity of the sector, they understand how this business works at a much deeper level than just looking at a balance sheet. This means they can take a longer-term view. Private equity [firms] like travel because the companies they buy are solving problems that are not a priority for the big players.”

For Kjellberg, a key strength of the group is its brands’ regional bases; Hoseasons in Lowestoft, Novasol in Virum, Denmark, and Landal GreenParks in The Hague, the Netherlands.

The company is reliant for much of its cottages, parks, boats and lodges product on a network of owners and operators who it must ensure are as well served as its customers. And Kjellberg says this means it has a vested interest in working with local authorities and planners to promote the localities it operates in to ensure tourism’s impact is positive for all.

“What I have realised is this is a very local business. The role’s given me a chance to discover more of the UK, and also parts of Denmark,” he said.

Kjellberg puts the brands’ growth down to having regional bases, not just headquarters in capital cities, saying it “has been an important aspect of how we’ve grown as a company, and that will remain the case.

“The service element is really important, the pride of local people caring about their community, it feels more like a municipal agency than a commercial venture. If you don’t have those strong local relationships, you can quickly run into problems.

“We employ local people who care about the community and the contribution the holiday rentals and the parks make.”

This decentralised structure also means there are untapped synergies behind the scenes, which Kjellberg says is preventing the firm exploiting its scale.

Much of this revolves around technology and marketing platforms, which will be updated to speed up “partner acquisition”, allowing more product to be brought on stream.

“I have not been able to spot a single synergy from the past that’s been realised. But I see lots of potential for synergies going forward, says Kjellberg.

“If we operate as a group, we will scale more quickly. This is true in all areas of business and ecommerce, not just in travel.

“If you build great technology that scales, so you can make marginal cost gains when bringing on additional suppliers, and share lessons, it gets better and better with scale.

“We are not leveraging that scale at the moment. There are something like 4.2 million second homes in Europe, if a third are open to being rented that’s one million. Today we have 300,000, so less than 10%. There’s clearly a great opportunity to expand.”

With the profile of holiday rentals never higher thanks to the likes of Airbnb and Expedia’s HomeAway, Kjellberg believes the sector is poised for significant growth.

“It’s like in the early days when independent hotels came in and it was a big deal. That’s largely gone away. The chains still dominate but for a consumer the difference is much less because they can get a lot of information online.

“We see increasing evidence, because of brands such as Airbnb and HomeAway, that people are much more open to staying in a cottage as opposed to a hotel.”

The key difference to Airbnb is the care with which the group’s brands look after both its supplier customers, trade partners and end consumers, Kjellberg says.

“What’s important for an agent is that when they send a guest to us we have customer service on the phone and local support so they will be happy and come back.

“The brands we have are phenomenal and there is lots of growth opportunity with the trade to build better experiences for our owners and our guests.”

1. What is your favourite holiday destination?

Lame answer, but the outdoors, wherever it may be!

2. What was the last book you read?

My Brilliant Friend by Elena Ferrante. I loved it!

A no brainer – coffee!

4. Who’s been your biggest influence in your career?

Dara Khosrowshahi [ex-Expedia boss]. A great boss, friend and someone I genuinely respect for his integrity and humility.

5. What is your favourite film?

6. What’s your most prized possession?

I hope I am a half-decent dad.

8. If you weren’t in travel what would you be doing?

My secret ambition is that I would like to be a project manager for Doctors Without Borders. Those are the people I truly admire.

9. If you won the Lottery, what is the first thing you would buy?