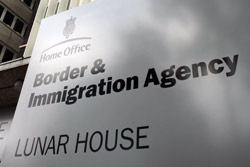 Immigration officers at Heathrow and other UK airports are poised to strike as early as next week, threatening lengthy waits for arriving passengers.

Members of the Public and Commercial Services union (PCS), which represents 1,100 immigration officers, recorded a 78% vote for a strike in a ballot announced yesterday.

Union officials will meet today to decide what action to take amid growing anger at a planned merger of customs and immigration services into a single UK Border Agency.

They argue that the merger will force immigration staff to undertake duties they have not signed up for – including strip searching and arresting people.

Talks with management continue, but it is increasingly likely August 5 the date of the formal merger – will mark the start of a series of one- or two-day strikes that threaten to escalate as 4,000 members of the Immigration Service Union (ISU) move to a ballot of their own.

The government has touted the change as toughening UK border controls. But unions say the merger will compromise security and object to it being imposed.

ISU national chairman John Tincey reported an online poll of members showed 77% supported a walk out, in a union that has never previously gone on strike.

Tincey told Travel Weekly: “Customs officers target flights. Immigration officers see every passenger. If you miss someone, you can be sacked. They are completely different jobs.”

He added: “Negotiations have got nowhere.”

Tincey confirmed the number of immigration officers has fallen due to central budget constraints. A PCS spokesman warned that, in the event of a strike: “There is potential for long delays at ports of entry.”

However, a spokeswoman for the UK Border Agency said: “Industrial action will have very little effect and border controls will be maintained. Contingency staffing plans will ensure business as usual.”