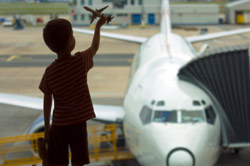 Airline association IATA may have pronounced a tail off in the decline in passenger numbers, but rather than abating, the crisis in aviation is deepening.

British Airways (BA) is expected to report a quarterly loss of about £100 million on Friday – its first ever loss in the period April to June.

Lufthansa’s half-year results, published today, show a €8 million operating profit. If that does not sound so bad, it represents a turnaround of €677 million on a year ago when fuel prices were rocketing skywards.

The German giant reported a €216 million loss for the six months and announced plans to cut €1 billion in costs by 2011. Lufthansa chief executive Wolfgang Mayrhuber said: “The figures speak for themselves. Crises ruthlessly reveal the weak points, and we shall act.” Expect BA’s Willie Walsh to say something similar tomorrow.

Lufthansa has some notable advantages over BA. Its merger and acquisition strategy is far ahead of BA’s, it does not have the pension deficit Walsh must deal with, and it now commands a slice of slots at Heathrow second only to BA.

But the chief problem besetting both is the recession and its impact on premium traffic. “Business travellers have increasingly been buying tickets in the cheaper booking classes,” says Lufthansa. BA reported premium passenger numbers down almost 15% year on year in June. The resulting losses are not sustainable long term.

BA’s eating into its sandwich offer on short-haul flights – expect no more than a snack from Monday – will not make much difference, bringing an annual saving of just £22 million.

Add in the £10 million BA saved through salary claw-backs from staff and it has barely recouped one-third of the losses in what is traditionally one of the most profitable quarters of the year.

Does that mean all is rosy for the no-frills carriers? Not necessarily.

Ryanair turned in a profit of €136.5 million for the three months to June excluding “exceptional items” – six-and-a-half times the profit the year before. Its passenger numbers rose 11% to 16.6 million, but the increased profit came almost entirely from the fall in the price of fuel.

Add in a 13% increase in ancillary revenues to €165 million and things do not look quite so robust. That 11% rise in traffic accompanied a 3% fall in revenue from fares – and a warning of still lower fares to come as the airline continues breakneck expansion.

The carrier forecast an annual profit of £25 million to £50 million for the year to September. Its passenger numbers were up just under 3% year on year for the quarter, but total revenue was up 12% and fare revenue by 8%. EasyJet is charging passengers more to fly.

The boardroom row over easyJet’s growth strategy appears settled – founder Stelios Haji-Ioannou had questioned the number of aircraft on order – with a statement setting out plans to deliver “prudent growth” while “maximising margins”. Capacity in the second half of 2009 will be just 3% up on a year ago, compared with projected growth averaging 7.5% a year up to 2012.

The good news for UK charter carriers is that both Ryanair and easyJet’s growth is coming primarily from Continental Europe. Indeed, easyJet has cut capacity from UK airports other than Gatwick by 10% on a year ago, while Ryanair will downscale a further 14% at Stansted this winter.

Latest figures from airport operator BAA confirm the picture. It reported a near £546 million loss in the first half of 2009, compared with a £135 million loss a year ago, which may not increase the value of Gatwick airport as BAA struggles to finalise a sale at the insistence of the Competition Commission.

However, BAA’s operational revenue was up on last year. The losses were chiefly down to depreciation in the value of terminals, losses on “financial instruments” and a rising pension deficit. Passenger numbers through BAA’s London airports in the six months fell by 4.4 million or 7.4% year on year to 55.2 million.

Gatwick and Stansted were the big losers – Gatwick seeing almost one in 10 fewer passengers and Stansted down by one in seven. Heathrow traffic fell just 3.8%, with transfer-passenger numbers increasing and now accounting for 38% of the total.

Perhaps surprisingly, if you do not run an airline, BAA’s revenue from handling passengers at Heathrow was up 35% on a year ago – reflecting higher airport charges. Gatwick brought the operator almost 13% more revenue and only Stansted a fall of 14%, in line with the traffic reduction.

Where BAA suffered was in its income from retail operations. Growth in passenger spending in airport shops, on duty free and on car parking came to a halt. The increase in BAA’s retail income of 1.7% did not match inflation.

Its income per passenger jumped at Heathrow – the net retail income per head rising 11% on the first six months of 2008, largely thanks to Terminal 5 – but rose below the rate of inflation at Gatwick and stagnated at Stansted.

What does that mean for users? BAA has generally increased charges to airlines below the rate allowed by the regulator, the Civil Aviation Authority. In future, it or whoever succeeds it at Gatwick and Stansted, may feel compelled to take charges higher, with a knock-on effect on fares. The alternative is to cut costs – of operations and/or investment – or to do both.