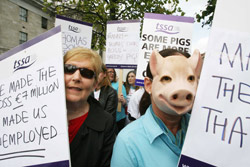 Thomas Cook staff in Dublin are staging a sit-in protest against the early closure of two retail shops.

Management from the group have told staff the two shops in Grafton Street and North Earl Street would close today. But staff have locked themselves into the Grafton Street store and have said they will not leave until they are offered a better redundancy package.

Thomas Cook had initially planned to close the shops in September. However, the closures have been brought forward after staff held a series of protests. A skeleton staff will be retained in the back office of Grafton Street to deal with bookings.

The latest demonstration was held on Wednesday, when staff criticised Thomas Cook chief executive Manny Fontenla-Novoa for the decision to pull all Thomas Cook branches out of Ireland.

A spokesman for Thomas Cook said: “The closure has been brought forward to minimise disruption to customers following industrial action.”

A ballot was held this week over strike action. Travel union TSSA representative Jessie Fenn said 100% of the members who responded voted in favour of a strike.

The closure of the shops will mean 46 redundancies in the Thomas Cook stores. A third Direct Holidays shop in the city, which has 30 staff, is also due to close at the end of the summer.

A Thomas Cook spokesperson said: “Following more than two months of consultation, it is with regret that we have now reached the decision to continue with plans to close the two Thomas Cook stores.

“During this time we have considered several alternatives to make the two stores profitable, but unfortunately these have not proved viable.

“The Grafton Street and North Earl Street stores will close today, Friday July 31. Our priority is to contact customers with bookings made through the two stores to let them know how to contact us, and to make arrangements for the collection of travel documentation.”