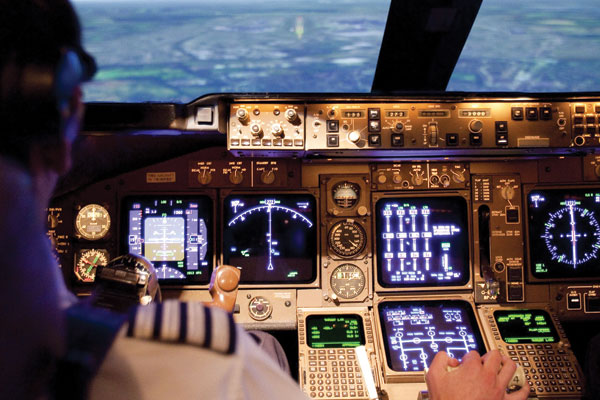 Don’t let a fear of flying put clients off. Eleanor Kirk learns how to overcome anxiety in the air

As we ascend towards the clouds I start laughing, tears in my eyes. I’m sitting next to the window looking out across the rolling green fields, and I feel overcome with emotion.

Barely 12 hours earlier, I had cried at the sight of my boarding pass for this very flight, so afraid that I couldn’t bear to look at my paper ticket as I stuffed it into my handbag.

“We roam around the cabin enjoying tea and biscuits, as captain Gordon Black regularly reassures us that everything is fine.”

Aside from the British Airways captains, cabin crew and air-traffic controllers on board, every passenger on the flight had a fear of flying this morning. There were people who had never flown before, those who hadn’t flown for more than 10 years and those who, like me, endured flying, rather than enjoyed it.

But our fears have been all but forgotten now. We roam around the cabin enjoying tea and biscuits, as captain Gordon Black regularly reassures us that everything is fine and reminds us to practise the calming techniques we learnt earlier in the day.

It’s almost unbelievable that we’ve come so far in just one day, but I can comfortably say that for the first time in 10 years, I’m enjoying flying. 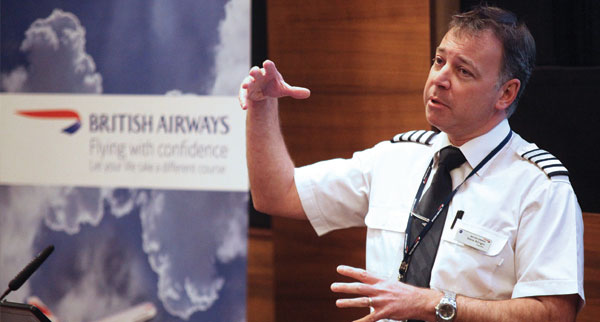 British Airways has been running its Flying With Confidence course for more than 30 years, combining practical knowledge with psychological coping techniques designed to change the way in which we deal with our anxieties.

Our morning session is led by two current pilots, captain Richard Sanders and captain Gordon, who want to know what scares us most about flying.

“This is just one of many revelations during the day that change the way in which we think.”

Chuckling, Gordon turns to a line-up of 10 pilots at the side of the theatre. “Have any of you?” he asks.

They all shake their heads. “I’ve got 21,000 flying hours – that’s three years of my life spent above the Earth – and I’ve never experienced extreme turbulence,” Gordon tells us.

“If flying was dangerous, I would be in a different profession.”

Relieved whispers spread among the 100 people in the theatre. This is just one of many revelations during the day that change the way in which we think. 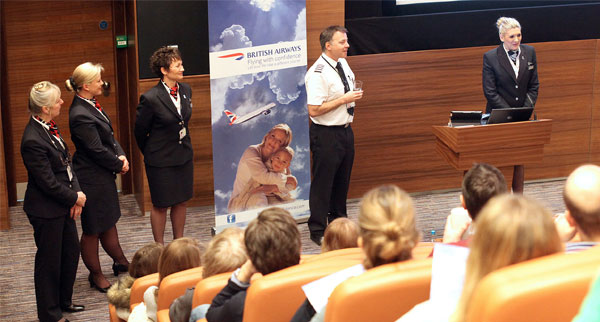 First, they talk us through the noises we might hear on board. It turns out a beep from the back of the plane doesn’t mean imminent disaster, just that the cabin crew have run out of milk. When a member of cabin crew is speaking into the onboard phone, it doesn’t mean something has gone catastrophically wrong with the engines, but most likely that the pilots fancy a cup of tea.

“Unless you’re told something is abnormal, just assume everything is fine on the flight,” Richard reassures us.

We’re told there is a contingency plan in place for every scenario, and the pilots respond to any possible catastrophe we can think of with a confident “we’ve trained for that”.

“It turns out a beep from the back of the plane doesn’t mean imminent disaster, just that the cabin crew have run out of milk.”

I now know so much about how a plane flies, I could happily reassure other nervous passengers.

I’ve also discovered a lot about just how much training pilots have to go through to gain and maintain their licence, spending hours in a simulator practising for any disaster that could occur.

“We’re tested every six months, and if we don’t pass, then we simply do not fly,” says Gordon.

During breaks, we speak one-on‑one with the pilots, cabin crew and air‑traffic controllers, all of whom are more than happy to answer any questions we might have.

This proves to be one of the most valuable parts of the day for me, as I can ask the experts about every fear I’ve ever had – and no one will tell me I’m being ridiculous.

“We speak one-on‑one with the pilots, cabin crew and air‑traffic controllers, all of whom are more than happy to answer any questions.”

Jai Dillon, a young first officer who will later fly us over the English Channel and back, approaches me at lunch and asks if there’s anything I want to ask him.

Now is my chance to put my biggest fear to rest.

“Is there anything at all that can make a plane drop out of the sky?” I ask.

I’m relieved to be told that there isn’t anything that could cause that to happen, and spend the rest of the time speaking to others on the course, who I’m surprised to find have many of the same worries that I do. 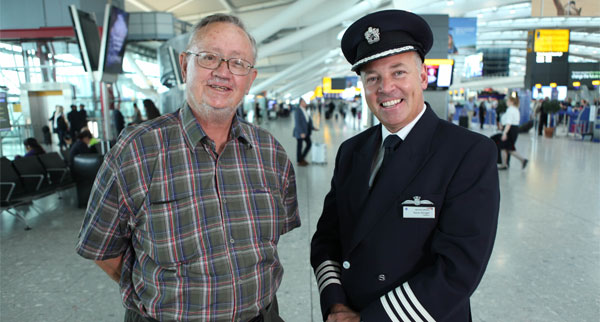 Our afternoon session is led by psychologist Dr Keith Stoll, who has an in-depth understanding of the anxieties and phobias associated with flying. He reassures us that anxiety is nothing to be embarrassed about – it’s a natural instinct designed to keep us alive – and rather than focusing on curing our anxieties completely, he concentrates on changing the way in which we think about flying and learning to deal with our feelings.

We are taught to recognise negative thoughts and interrupt them before they can take control. “One of the most effective things you can do to reduce your anxious feelings is to breathe and squeeze,” says Dr Keith.

“Eyes closed, he talks us through what will happen when we leave the auditorium, from going through security to taking our seats on the plane.”

And so 100 nervous flyers in the auditorium of Heathrow’s Sofitel simultaneously clench and release their buttocks, while taking deep breaths. It’s not the Saturday afternoon I’d envisaged, but I can feel my anxieties, which had already begun forming before the impending afternoon flight, melting away.

Just before we make our way to Heathrow’s Terminal 2 for our round‑trip flight, Dr Keith leads us in a group relaxation exercise. As we close our eyes, he talks us through what will happen when we leave the auditorium, from going through security to taking our seats on the plane.

He calls it ‘practising for success’, and I feel a bit silly as a tear or two wells up at the thought of boarding the aircraft. 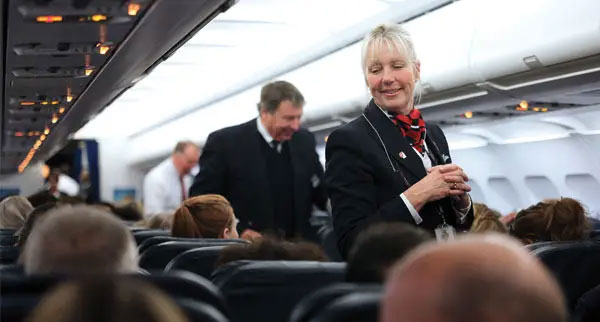 As we make our way to the terminal, I still feel anxious, but as I stand in the security queue practising the ‘breathe and squeeze’ technique, I feel my palpitations slowly ease, the lump in my throat dissolve and my racing thoughts slow to a more manageable level.

“Don’t worry, we’ll be fine,” I find myself saying to a man about my own age, who is shaking like a leaf. I find my confidence slowly growing as I board the plane, running over everything I’ve learnt in my head.

“The person sitting behind me hadn’t stepped onto a plane in years, and said he’d even ripped up a ticket to Majorca at the check-in desk.”

I take my seat next to a man who tells me his reason for going on the course.

“My daughter lives in Australia,” he tells me.

“I haven’t been out to see her yet, and she’s getting married – I need to go and meet him.”

The person sitting behind me hadn’t stepped onto a plane in years, and said he’d even ripped up his ticket to Majorca at the check-in desk last summer. 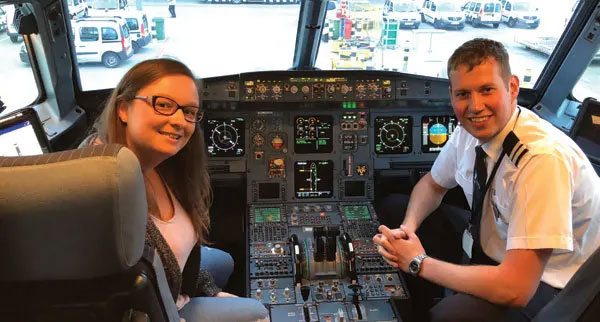 And yet here we are, nervously exchanging smiles and words of encouragement as we taxi towards the runway. It’s this sense of camaraderie that makes the course so successful; it’s reassuring to know that I’m not, and never have been, alone.

After a smooth ascent, with Gordon narrating exactly what is happening, we’re coaxed out of our seats to test our new-found confidence. As I walk to the back of the plane, it feels as if every single passenger is out of their seat. The entire cabin is buzzing with chatter and laughter.

“I can’t help but think that every flight should have Gordon’s reassuring voice telling passengers that everything is OK.”

I spend most of the flight staring at the view across southern England. I’ve never looked out of a plane window like this before, and I could kick myself for missing these beautiful views for so many years.

“We’re now turning around to head back to Heathrow. Everything is absolutely fine; everything is completely normal,” says Gordon over the public address system.

I can’t help but think that every flight should have Gordon’s reassuring voice telling passengers that everything is OK – it’s certainly enough to comfort me. 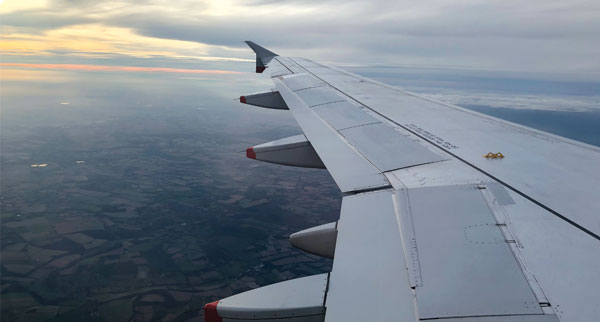 Am I cured? Not yet. I still felt nervous. But I felt more in control of my anxiety than ever before. I practised Dr Keith’s techniques on each flight, and when turbulence hit, I mentally ran through everything I had learnt from Richard and Gordon.

“I practised Dr Keith’s techniques on each flight, and when turbulence hit, I mentally ran through everything I had learnt.”

With more practice, I think that eventually I’ll be just like any other passenger on a flight. But for now, I’m happy with the dramatic improvement to my flying experience.

Accessible tourism: How to get a helping hand at the airport
Q&A with Jayson Goh, Changi Airport
What’s all the fuss about the A350? We find out