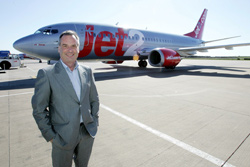 Jet2.com is launching three routes out of Manchester for summer 2010, creating 250 new jobs.

The additional routes will be Kos, Venice and Gran Canaria, making it the first time that Manchester has offered Kos and Venice.

The airline is also increasing the frequency of its summer 2010 services to Lanzarote, Dalaman, Sharm el-Sheikh and Tel Aviv, which, combined with the new routes, will create the extra jobs.

The announcement came after the airline said August had been its busiest month for bookings since its launch six years ago.

It also follows yesterday’s announcement by Ryanair that 600 jobs will be lost at the airport as it pulls nine of its 10 routes from Manchester from October 1, with the loss of 44 weekly flights.

Jet2.com chief executive Philip Meeson said: “It is fantastic to be able to offer people flying from Manchester a number of new holiday destinations direct from the region. No other airline operates a scheduled service to Kos and Venice and we are confident these will be popular routes.”

Manchester Airport managing director Andrew Cornish added: “This news is a boost to holidaymakers travelling from the northwest. The fact that Jet2.com is continuing to expand its services from Manchester is encouraging to the airport and the region as a whole.”