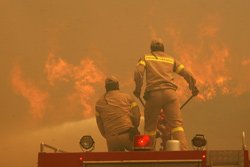 Greek authorities have resumed their battle against wildfires north of Athens.

More than 90 fires have spread across the region since August 22, and about 2,000 firefighters and soldiers are battling the flames.

While the authorities were given some respite overnight when winds dropped, they are now predicted to pick up at about midday local time, fanning the flames, which are burning across an area about 30 miles wide. About 37,000 acres of land have been burnt so far.

Although Athens has been spared, the city remains under a pall of thick smoke.

The town of Marathon, which has many important archaeological sites, was also spared, despite being encircled with flames. About 10,000 inhabitants were evacuated on Sunday from the suburb Agios Stefanos, 14 miles northeast of Athens.

Latest on this story