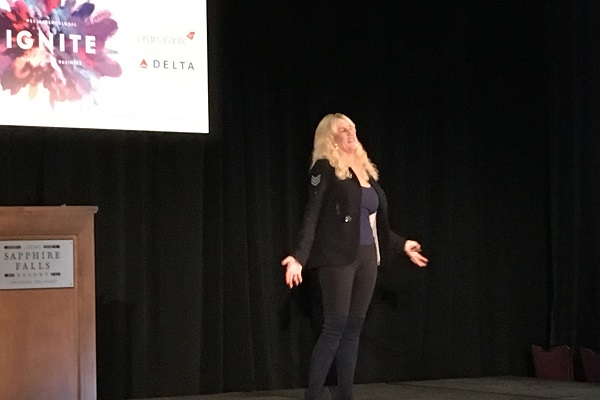 Delegates were urged to believe in themselves by a series of motivational speakers at this year’s Global Travel Group conference in Orlando.

American lawyer Erin Brockovich, whose legal battle in Hinkley was depicted in a film starring Julia Roberts, spoke about how she overcame obstacles such as dyslexia to take on corporate giants to win what was the largest court settlement in American history.

She told agents attending the conference, themed ‘Ignite’, to stand out from the crowd and not be afraid to do things differently.

“Be different,” she said. “Different is good.

“My work was really about me being human, and not being afraid to be human.”

Brockovich praised the value of travel agents, and told how she was supposed to travel to Venice with a friend who booked their own arrangements.

“She ended up with an hour’s layover in Frankfurt. I told her she should use an agent, and she will be doing so next time.”

She explained how her determination to be a TV presenter saw her take on challenges that in the early 90s – “before the Spice Girls and girl power” – were seen as unattainable for women.

Hill, who also writes travel blog, also explained how the best part of a recent trip she went on to Kissimmee was a kayaking trip, adding: “That was the absolute highlight and something I would never have found no my computer. It’s the little bits of knowledge that set travel agents apart.

Addressing the agents in the room, she added: “You all have a great job. You’re not just selling holidays you’re making memories for families hat last a lifetime.”

On sales pitches, she said it was important to “sell the sizzle, not the sausage”, meaning that experiences and activities can get customers excited more than the details of a destination.