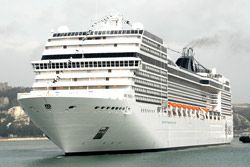 McEwan said the association was becoming more attractive to cruiselines, with MSC Cruises the latest to join in May. Others, such as P&O Cruises and Thomson Cruises, are already members.

However, cruise operators such as Royal Caribbean Cruise Line have yet to sign up.

“MSC joined and a number of others are in talks with ABTA and will make announcements soon. Membership has increased year-on-year despite the economic situation,” he said.

He was hopeful other agency groups such as Travel Counsellors, which quit ABTA in 2005, may consider rejoining the association in the near future.

“I think there is an opportunity for other organisations out there. Travel Counsellors is highly reputable and was once a member and we will be looking at members like that to see if we can get closer,” he said.

ABTA has been striving to expand membership levels for some time, with ABTA chief executive Mark Tanzer making it one of his priorities to lure back lost members, such as Travel Counsellors, when he joined.

McEwan admitted there had been a higher number of retail failures among members this year compared with last year because of the economic climate. Recent casualties included Cambuslang Travel, which prompted McEwan to warn agents to keep an eye on their cashflow.