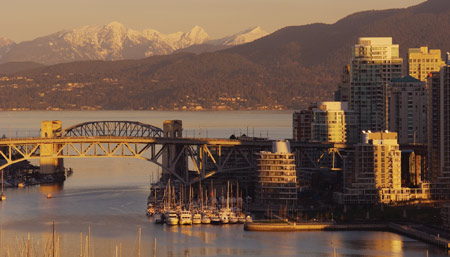 Surrounded by verdant mountains, handsome, high-rise Vancouver is consistently highly ranked in surveys of the best cities to both live in and visit.

It’s multi-cultural and has a vibrant arts scene, but its proximity to the wilderness means there is a laid-back pace and rugged backbone to its urban atmosphere.

It is a place of distinct neighbourhoods, all begging to be explored, from Gastown, the historic, cobbled streets where Vancouver began, to Chinatown, where visitors should head for the Dr Sun Yat-Sen Chinese Gardens and the cultural centre. There’s Little Italy and Little India, and the confluence of cultures has resulted in a city full of gastronomic variety.

Vancouver’s famous Museum of Anthropology reopened in March after a £1.98 million renovation. It’s packed with the history of this area, including many exhibitions dedicated to First Nations cultures.

One thousand acres of evergreen oasis close to the downtown core, Stanley Park is famed for its five-mile-long sea wall, and is the perfect spot for people-watching. A water-taxi ride to Granville Island will reward visitors with a bustling public market, street performers and plenty of seafood restaurants.

Those with a head for heights should cross Lions Gate Bridge to North Shore, and visit the city’s oldest tourist attraction, the Capilano Suspension Bridge. Built in 1889, it stretches 137 metres across, and 70 metres above, the Capilano River.

Also on North Shore is Grouse Mountain, the city’s most popular viewpoint. Visitors can choose between hiking up the Grouse Grind, known as Mother Nature’s StairMaster, or opt for an aerial tram ride.

Water, wildlife and wilderness are the order of the day for visitors to this 19,000sq mile island. Whether they are sailing around the fjord-like coastline, canoeing down the rivers or hiking through ancient forests and majestic mountains, the great outdoors will feature prominently for clients.

It’s an ideal location for spotting orcas, humpback and grey whales, grizzly and black bears, and birds, and offers fresh and saltwater fishing.

Diving off the island is world-renowned – the Jacques Cousteau Society rates the waters second only to the Red Sea for clarity and diversity of marine life.

At Snake Island, just offshore from Nanaimo, visitors can experience the thrill of snorkelling with seals. The island is famed for its mild climate, however, storm-watchers love to see the vast winter waves crash on the island’s western shore in the Pacific Rim National Park.

At the southern tip of the island sits Victoria, British Columbia’s capital and a different city from Vancouver. With many well-preserved heritage buildings and smart governmental offices, it has a charming old-world ambience and a slow, relaxing pace. “It’s pretty and anglicised,” says Travelpack consultant Susan Cranstoun.

The arts scene thrives, with live music, theatre and plenty of art galleries and museums. Vancouver Island’s Chinatown is the oldest in Canada, and is home to the country’s narrowest street, Fan Tan Alley. Visitors shouldn’t miss the Butchart Gardens, or Thunderbird Park, which has a display of 15 totem poles.

From Horseshoe Bay, outside of Vancouver, the Sea to Sky highway runs along the coast of the steep-sided Howe Sound. After passing through Squamish, one of the premier rock-climbing destinations in North America, it runs inland up to the mountain resort of Whistler. The Whistler Mountaineer train also makes the run up from Vancouver.

Although it is best known as a ski destination, there are more than 8,000 acres of terrain on Whistler and Blackcomb mountains to be explored. Other snowy pursuits include snowboarding, showshoeing, snowmobiling, dog-sledding and horse-drawn sleigh rides.

There is plenty to do in summer too, including alpine hikes, mountain biking, tours by jeep or on horseback, ziplines and golf. The adventurous can try glacier walking, for which they are kitted out with boots, crampons, ice axe, helmet, harness and rope. Alternatively, the Squamish Lil’wat Cultural Centre brings alive the history of First Nation tribes in this area.

In December last year, the Peak2Peak gondola spanning the valley between Whistler and Blackcomb mountains opened. The pods are suspended 436 metres above ground at their highest point in the three-mile journey between the two peaks.

Although it is part of the mainland, the Sunshine Coast is only accessible by ferry from Horseshoe Bay. There are sandy beaches and a micro-climate, which means it receives less rain than Vancouver.

“One small road winds up and down the coast. The sea views are pretty, and the area is full of artists and potters. It’s great for families, with riding, canoeing and walking. It’s where many Vancouverites have weekend cottages to escape the city.”

Sailing in the area’s magnificent marine parks is popular. Gibsons is a short hop out of Vancouver, and at the north of this coast, Desolation Sound is pristine and remote.

To the east of the Metro Vancouver area, Fraser Country’s name is coined from the powerful river that cuts through it. Lush green fields characterise the Fraser Valley, an agricultural region packed with wineries, micro-breweries and gourmet food all crafted by small, local producers.

Further upstream, the river has eroded the 600-metre-deep Fraser Canyon, perfect for white-water rafting from bases at Hope or Lytton. A new airtram whisks visitors high above the impressive Hell’s Gate gorge. In spring, 200 million gallons of water flow through here per minute, which is twice the volume that gushes through Niagara Falls.

The new Canada Line monorail Sky Train opened in August, and runs between Vancouver airport and downtown Vancouver in 26 minutes. It costs £2.10 for a single ticket. canadaline.ca

The Shaw Ocean Discovery Centre opened in Sidney, Vancouver Island in June. There are 17 aquariums with different habitats and thousands of species to see, with experts to talk visitors through and an interactive exhibition. oceandiscovery.ca

Frontier Travel has a 15-night Coastal Circle Route tour starting from £1,092 on departures between October 15 and 31. The price includes accommodation and some excursions but not flights. frontier-canada.co.uk, 020 8776 8709

1st Class Holidays offers a five-day Sea, Sky and Rail escape visiting Vancouver, transferring by floatplane to Victoria and Whistler, and then taking the Whistler Mountaineer to Vancouver starting, from £699 per person, twin-share, including accommodation and a whale-watching tour. 1stclassholidays.com, 0844 499 0771

Attraction World offers a range of excursions in the Vancouver area, including a tour of Vancouver for £48, a tour of North Shore, Grouse Mountain and Capilano for £91, and a day tour of Victoria for £135. attractionworld.com, 0871 700 8888