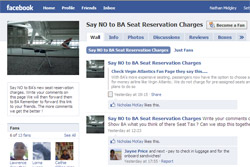 A London travel agent is taking action against British Airways’ (BA) plan to charge customers to reserve their seat in advance.

The airline announced last week that customers who want to choose their seat more than 24 hours before their flight will face charges between £10 and £60. BA claims the charges will “give customers more control over their seating options”.

Travel Designers branch director Nicholas McKay has set up a group on social networking site Facebook called ‘Say NO to BA seat reservation charges’. He aims to gather as many followers as possible before forwarding members’ comments to the airline.

Writing on Travel Weekly’s travelhub message board, he said: “This is one charge too many. Everyone should refuse to pay it or, even better, book another airline.

“If you have paid thousands of pounds to take your family on a club-class holiday you should not be expected to pay to sit together.”

Meanwhile, Which? Holiday has also slammed the charges, saying they will be off-putting for travellers. Head of research Rochelle Turner said: “Budget airlines charging people for a service that used to be included in the headline price has become a familiar theme for travellers. But how disappointing to see BA jumping on the bandwagon.

“If you aren’t quick enough, or you don’t want to pay the fee to reserve your seat, you could find yourself sitting on the other side of the plane from your family or partner. It’s no way to start a holiday.”