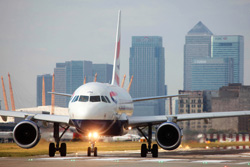 The new service, which had its maiden flight on Tuesday (September 29), will be the first to allow passengers to send emails, texts and use the internet via an in-flight mobile communications service, provided by OnAir.

Check-in can be made just 15 minutes before departure, and passengers will be cleared by US customs and immigration during a brief refuelling stop at Shannon airport, Ireland, so will be treated as domestic arrivals when they land at JFK.

Other features of the service include 32 lie-flat beds in a cabin designed to feel “spacious and contemporary”. Customers will also be entitled to complimentary health club access at the London Marriott, West India Quay.

“For the first time, the City has a tailor-made premium service to New York on its doorstep offering the most productive possible use of time for business people travelling between the two great financial districts.”

London City chief executive Richard Gooding said: “Providing long-haul services for the first time out of London City is a major milestone in the history of the airport.

“New York is the most in-demand destination not currently served from London City. The new route is a key growth opportunity for us, and demonstrates the premium nature of the airport.”

Signalling the importance of the launch, the airline has allocated the service its most prestigious flight number, BA001, which was formerly used by Concorde.