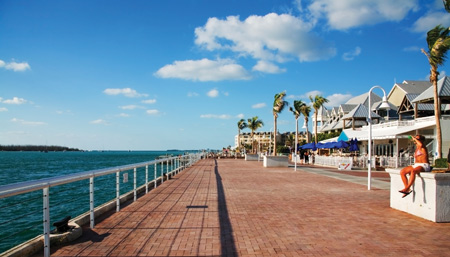 The Florida Keys, a string of hundreds of small islands off the southern tip of Florida, are a world away from your standard Florida experience. And the jewel in the crown is Key West, the southernmost Key, which is just 90 miles from Cuba.

Historically, Key West is best known for its connection with author Ernest Hemmingway, who lived, wrote and drank there for many years. Hemmingway House, a beautiful Colonial Spanish building where he wrote many of his novels, is rightly Key West’s prime attraction.

Although Key West is now a major tourist destination, it still retains much of its former laid-back, raffish charm. Those born in Key West refer to themselves as conchs (pronounced conk), and they are a tolerant bunch. Alternative lifestyles are readily embraced and Key West has become a major destination for gay visitors. Some of the boutique inns also have ‘clothing-optional policies’.

There is a wide range of accommodation available from five-star resorts to chain hotels, ‘mom and pop’ motels to a superb range of charming bed and breakfast establishments. I stayed at the gloriously appointed Casa Marina Resort right on the beach, part of the Waldorf Astoria collection.

While the Keys work well as a holiday destination in their own right, they really come into their own as part of a Florida twin-centre break, making a great add-on to an Orlando-based theme park holiday.

Low-cost carrier AirTran Airways has just announced a new direct flight from Orlando to Key West. The four-times-a-week service will be launched in December, and the return flight to Orlando allows good connection times for homebound flights to the UK.

Key West is ideal for twin-centre clients, and works well with Miami as a flydrive package, enabling visitors to explore the Overseas Railroad and the sights of Key Largo, Islamorada, Marathon and Big Pine Key before ending up in Key West.

Virgin Holidays head of Florida product Gill Standeven says: “Our customers enjoy the flydrive options. The drive down to the Keys is an adventure in itself, with amazing views. The Keys are an important part of our Florida offering; it shows the variety the state has to offer.”

She adds: “Key West offers a different vibe that works well for repeat visitors. It has cute boutiques, great outdoors, local food and a literary legacy [from Hemmingway].”

There are several other Keys that offer a distinct Florida experience, the best known of which is Key Largo, renamed after the famous movie of the same name starring Humphrey Bogart and Lauren Bacall.

Unfortunately, Bogart never visited Key Largo, and the movie was shot on a Hollywood back lot, so there are few movie-related sights other than the boat used in another Bogart movie, The African Queen.

The big attraction on Key Largo is the John Pennekamp Coral Reef State Park, which consists of 75sq miles of ocean, including a living coral reef and 170 acres of land.

Divers will be particularly enticed by the Jules Undersea Lodge, where there is no chance of late-night noise pollution from the streets above. Although Key Largo cannot compete with Key West for laid-back ambience, it is the nearest Key to the Everglades, and a much shorter drive from Miami and ideal for those with less time.

The Keys differ from other Florida beach resorts in that the emphasis is on the ocean rather than the beach. Sports fishing is huge and there are some good dive sites, although don’t expect Red Sea quality. Boat trips out to the Gulf Stream and tiny islands are popular and easily arranged.

All the Keys are different in ambience and activities. Marathon Keys, home to the Dolphin Research Centre, is renowned for its fishing, and the old Seven Mile Bridge is billed as the longest fishing bridge in the world.

No Name Key is a great place to see the tiny, endangered Key Deer, and the National Key Deer Refuge is spread over several Keys. Islamorada Key is home to several historic sites and the fun Theatre of the Sea.

Don’t forget to suggest a pit stop at Sloppy Joe’s (a legendary Hemmingway watering hole) in Key West, and watch a Keys sunset, with Mojito in hand and a slice of Key Lime pie on the plate.

Virgin Holidays offer seven nights in Florida Keys and Miami, with four nights’ accommodation at the Casa Marina Resort and Beach Club followed by three nights at the Albion South Beach on a room-only basis from £1,132. Prices include flights on Virgin Atlantic from Heathrow and car hire. vhols4agents.co.uk, 0844 557 3859

Kuoni offers seven nights at the Cheeca Lodge and Spa, Islamorada from £1,165 per person twin-share, including flights from Heathrow with British Airways and Alamo car hire. kuoni.co.uk, 01306 747008