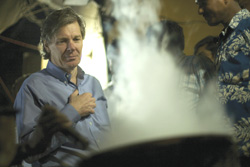 It is time the industry woke up to the challenge of climate change, says TUI Travel mainstream managing director Dermot Blastland.

Ian Taylor spoke to him on the eve of the ABTA Travel Convention.

Q. How concerned are you about global warming?

A. We should take the predictions of the Intergovernmental Panel on Climate Change seriously. We will see rising sea levels and water shortages in many destinations. If we do not take this seriously, and don’t behave responsibly, it could be very damaging.

Q. When did you start to take environmental issues seriously?

A. Probably when we were required to submit Corporate Social Responsibility reports. But it was more a general realisation that we have a responsibility for the world.

You see a lack of respect in some destinations for the very things people travel to see. You see degradation. I wasn’t cynical about the environment and I didn’t think it was nonsense.

Q. What was the attitude in your company?

A. We first realised it in the mid-1990s. A guy came in to discuss a Center Parcs development in Sherwood Forest. He talked about sustainability and best practice. He had audited some resorts, and the results surprised us. He said: “You have no idea how much positive interaction there is between local communities and your resorts.”
“People were disengaged. They said things like: ‘Dermot is into this – it’s his hobby.'”

Staff were involved with local schools or cleaning beaches. A lot of people in our organisation want the company to do things well. No one in the senior team opposed it, but people were disengaged. They said things like: “Dermot is into this – it’s his hobby.”

If you don’t know your starting point, you cannot demonstrate benefits. Movement can be slow.

It is a challenge because we have to run the business. But most of this is good business practice. The business case convinced a lot of senior people. Head of sustainable development Jane Ashton is good at showing the benefits. There can be millions of pounds in savings.

We are the leading holiday company and we should lead on this, but it is not about that [it’s about taking action].

Q. How do you view the wider industry response? Have you encountered resistance?

A. Jonathon Porritt [former head of the Sustainable Development Commission] says we have been appalling as an industry. The oil and mining industries have tackled the issue better. We have not taken it seriously, so we are an easy target.

The industry is getting better. The difficulty is not in getting senior managers to say they believe in the importance of this, but in embedding it in organisations; getting reporting systems in place, setting objectives, getting it built into plans. That takes time and investment.

There is a lot of good practice. Another operator might be streets ahead of TUI Travel, but it may only be selling 15,000 holidays a year.

But the industry has been poor when it comes to aviation: it is always pointing the finger somewhere else, saying aviation is only 2% of global emissions. We shouldn’t be telling other sectors what they should be doing. Tourism is the area of the economy we work in. Are we operating best practice?

However, the industry is not just TUI Travel and Thomas Cook, it is easyJet, Ryanair, British Airways, and all the major hotel chains. All airlines should have to report their emissions, so people can see them and we can set targets.

Q. So what is required of the carriers?

A. We should cut emissions dramatically. A lot of airlines are setting reduction targets for 2025 or 2050, which is convenient [it gives them time]. We reduced our aviation emissions 8% last year, and we intend to cut them a further 10% by 2014. People may say that is fortunate timing because we plan to replace our older aircraft, but we are doing it.
“We have not helped ourselves by finger pointing. Every airline says it is better than its rivals.'”

There should be a standard measure showing emissions per customer per kilometre flown. It would show that leisure airlines are more efficient than low-cost carriers or scheduled airlines with Boeing 747s. We are efficient per passenger because of our higher load factors.

There is resistance to doing that because the other airlines know it would [make them look bad], but we need it.

We have not helped ourselves by finger pointing. Every airline says it is better than its rivals, and all of us are tarred. Everyone should be judged by the same standard. We need to get the figures out, with targets to get emissions down, and make everything transparent.

Q. The Co-operative Travel Group managing director Mike Greenacre argues that aviation growth should not exceed improvements in efficiency so emissions stabilise. What do you say?

A. I understand where he is coming from. There will be a balance between efficiency and growth. The environmental lobby understands this is not about stopping people flying.

There are problems with a cap on growth. Provided you follow best practice, there should not be a cap. But growth has to be sustainable. All activity must be sustainable, and must be carried out in the best possible way. Aviation will become more expensive.

Q. How far does the industry have to change?

A. In one way or another, and as fast as possible, we have to reach a position where people can go on holiday with a zero carbon impact. We should be planning to end our dependence on carbon.

Hotels are responsible for about 25% of tourism’s carbon impact. Can we get that to zero?

It is probably unrealistic to expect a replacement for aviation fuel in the next 20 years. The industry needs to get its act together the best it can. We need to say: “In order to fly, we have to reduce emissions elsewhere.”

Q. Other industry figures have complained about a lack of understanding among consumers or retail staff, for example about carbon offsets. Is that true?

A. Why should people understand carbon offsetting? There is a low uptake, and it is short term anyway. Emissions trading will take all that away.

We have put a lot of investment into our World Care Fund [which funds projects in destinations and includes an offset contribution]. If a customer contributes £1, we match it, and uptake rises when we explain it.

Take-up is higher through our own channels. Third-party retailers may not be up to speed, and agents may not want to spend time talking about it, feeling it’s another £4 or £5 on a family booking.

Customers are not coming in saying: “I want an environmentally friendly holiday.” They just want to go away and have a good time.

We have to say: “If you go to this hotel or travel with this company, it is gold standard – the hotel, the aircraft, the speed it flies, the emissions, they are all best practice.”

We know we need to do a lot more internal communication. We are rating all our hotels, then we will explain it all to staff.

We cannot say every hotel in every brochure in every location meets the standards of the Travelife sustainability system [developed by TUI Travel and adopted by the Federation of Tour Operators]. But we are trying to work with hoteliers to improve this. Educating and briefing staff is probably 12 months away. This is part of a five-year plan, which is a continual process as there is a 20% annual turnover in shop staff.

Q. How do you view the government’s approach?

A. It is a shambles, ill-thought-out and sloppy. Air Passenger Duty (APD) is not used to incentivise environmental good behaviour. It is a revenue earner. Where is the encouragement? APD is penal. From November, under the new APD banding system, flying to Hawaii will be taxed the same as flying to Washington.

Climate change is not an easy issue, but the government determines the mood of the country. Where is the political leadership? This is not about penalising airlines, it is about energy policy and education. Why aren’t new buildings constructed to the best environmental standards? Why don’t we have cars with lower emissions? There is no leadership, just tokenism.

We got into this some time ago and we have not seen one act of government support. Everything we have done has been in a headwind of lack of support – investing in fuel-efficient aircraft, ordering the Boeing 787, setting up and supporting Travelife. The government has been shocking.

(Find out more about the Travelife scheme in Ian Taylor’s November 2008 report from a Paphos hotel audit – Ed.)

Q. If you could send a message to the trade in the week of the ABTA convention, what would it be?

A. Get on top of this [the issue] and take it seriously. Cut your energy requirements. What is wrong with using less oil anyway?

Let’s see everyone move the bar – whatever influence you have. Never mind what Dermot Blastland is doing. What are you doing?

Everyone has a carbon impact, everything we do has an impact. We could all say our impact is small. Every shop is small, but if you have 900, it makes a difference.

Take responsibility, know your impact, and set targets to reduce it.